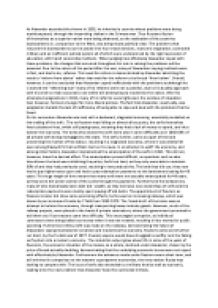 How effectively did Alexander II cope with the problems he faced on his succession?

﻿As Alexander ascended the throne in 1855, he inherited a country whose problems were being starkly exposed, through the impending defeat in the Crimean war .Thus Russians illusion of themselves as a superior nation were being shattered, as the realisation of the countries backwardness in, comparison to the West, was being made painfully clear. The problems that induced this backwardness can be placed into four broad divisions, economic stagnation, outmoded military and an inefficient judicial system all of which were underpinned by the rigid repression of education, with harsh censorship methods. When judging how effectively Alexander coped with these problems, the changes that occurred throughout his rein in solving the problems will be assessed. Due to the nature of the period after the war, many of Alexanders coping methods were in fact, and had to be, reforms. This need for reform is demonstrated by Alexander admitting the need to ?reform from above? rather than wait for the reform to be forced ?from below?. Overall, however, it can be concluded that Alexander coped ineffectively with the problems as although he is named the ?reforming tsar? many of his reforms were not successful, due to his duality approach with his wish to retain autocratic rule whilst still attempting to modernise the nation. ...read more.

The rules were, also, loosened along with conscription being compulsory for all above the age of 21, reducing the class prejudice that had littered the army previously. Peasants were also able to rise up the ranks, of the army providing more incentive, this did, however, create tensions within the army as nobility resented the prospect of peasants having the opportunity to be above them. The army size was also reduced, so that the members could become more specialised and professional, this saved government spending as previously 45% of money was spent on the army. The conscripts did, however, had to remain on standby, and could be mobilised in case they were suddenly required. The advances that the army had made were demonstrated through their victory over Turkey in 1877. This victory took longer than expected, although the army was improved and modern weaponry had increased, the weapons were still nowhere near as effective as of modern armies around the world. So when assessing how successful Alexander was when coping with this problem, he was successful to an extent but many of the previous problems still blighted the army. One theory for the lack of technology was as well as economic struggles? the lack of education and tightly controlled censorship, suppressed ...read more.

Alexander came to power, in a time were the slaughting defeat in the Crimea, meant that he had no choice but to deal with the problems his nation faced, as he form of coping through the introduction of reforms. Although he attempted to amend his nations difficulties, if completely perfected this would actually destroy him and his autocratic rule. Alexander, therefore was forced to take a duality approach to the reforms, were his liberalism was slashed after the attempted assignation of him in 1866. This meant that on his death, assassinated by the liberal terrorists, he was leaving a Russia with many of the same problems, although there had been some advances, Alexander was his own worst enemy. As if he reformed, he opened the door to liberalism and eventually the wish for a parliament and out booting of him, yet if he did not reform his nation would be left floundering in the western powers wake as an ever backward nation. This is the reason that he reforms were not effective in dealing with the problems, so did not cope well, as the reforms themselves had two contrasting ambitions and often took too long to implement. ...read more.