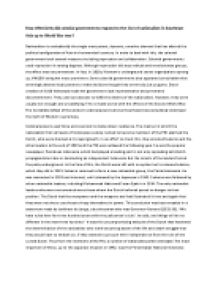 How effectively did colonial governments respond to the rise of nationalism in Southeast Asia up to World War Two?

﻿How effectively did colonial governments respond to the rise of nationalism in Southeast Asia up to World War two? Nationalism is undoubtedly the single most potent, dynamic, emotive element that has altered the political configuration of Asia in the twentieth century. In order to deal with this, the colonial government took several measures including repression and collaboration. Colonial governments used repression in varying degrees. Although repression did stop radicals and revolutionary groups, the effect was not permanent. In fact, in 1920s, Vietnam?s underground secret organizations sprang up, VNQDD being the most prominent. Some colonial governments also appeared consultative that seemingly allowed local powers to make decisions though they were truly just puppets. Dutch creation of 1918 Volksraad made the government look representative and prevented discontentment. They used concessions to fulfill the desires of the nationalists. However, they were usually not enough and unsatisfying. This is made worse with the effects of the Second World War. The incredible defeat of the western colonial powers all over Southeast Asia completely destroyed the myth of Western supremacy. Colonial powers used force and coercion to clamp down resistance. The manner in which the nationalists from all levels of Indonesian society rushed to become members of the PNI alarmed the Dutch, who were shocked at its rapid growth. In an effort to check this, they arrested Sukarno and the other leaders at the end of 1929 and the PNI was outlawed the following year. ...read more.

But once again the Dutch failed in their move, mainly because they still retained a majority over the Indonesian members by thirty to twenty-five. On the contrary, Dutch attempts to come to terms with the Indonesians were interpreted as a sign of weakness and helped to strengthen the demand for independence on a scale which was more widespread than anything that had taken place before 1926. On the other hand, in Vietnam, a series of a well-organized uprisings and demonstrations under Phan Chu Trinh, a prominent Vietnamese scholar, broke out in Annam and Tongking, including an unsuccessful attempt in 1908 to poison the French garrison stationed at Hanoi. The scene then shifted to Annam where in 1916, the scholar Tran Van Cao organized a large scale uprising. But the French were able to suppress it without much difficulty because it was poorly organized. The French followed this by letting loose a scourge of reprisals which saw a few lucky nationalists make good their escape to Canton and Japan. Those who were unlucky to be caught in the French dragnet were sent to rot in the forced labour camps on Pulau Condore and Lao Bao. When the new Popular Front came into power in France in 1936, the Caodaians got involved and began to take part in the spread of nationalist propaganda and adopted pro-Japanese but anti-Anglo-French attitude. ...read more.

Thus, they tend to control the nationalists ineffectively as they were no longer looked upon as the ?supreme power?. And, When the Second World war broke out in Europe in 1939; Kuala Lumpur witnessed the formation of the first Congress of Malay Associations. The government then played its hand by arresting the leaders of Kesatuan Melayu Muda on the eve of the Japanese invasion of 1941. The fall of Singapore to the Japanese in February, 1942, saw the latter release the detained leaders who then began their own campaign of anti-British activities. The final act of nationalism in the period under review was the formation of Kesatuan Rakyat Istimewaan 1945. Thus, their efforts to arrest the nationalists were useless. In Myanmar, after the war, the British also insisted on the need for a transitional period of their rule in order to be able to restore the country which had greviously suffered during the war. But, the British were also no longer the ?supreme power?, the Myanmar people wanted the British to quit immediately. Therefore, the response of colonial governments to the rise of Nationalism in Southeast Asia up to World War Two weren?t in fact insignificant in the long run, given the consequences of the Second World War. There is a possibility that their responses could be effective if only they weren?t affected by the Second World War. The natives could possibly still recognized the colonial powers? supremacy and fear them. ...read more.