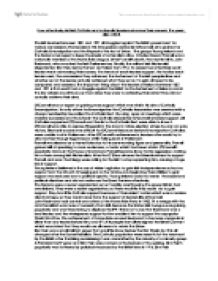 How effectively did Irish Catholic and nationalist leaders advance their cause in the years 1801-1921? The Irish leaders between 1801 and 1921 all struggled against the British government for various concessions. The leaders in this time period are Daniel O'Connell, who pushed for Catholic Emancipation and the Repeal of the Act of Union. The groups Young Ireland and the Fenians managed to keep the ideals of nationalism alive. Charles Stewart Parnell was a nationalist member of the Home Rule League. After Parnell's death, the mantle fell to John Redmond, who re-united the Irish Parliamentary. Finally, the militant Irish Nationalist Organisation Sinn Fein, led by Eamon de Valera from 1916. To assess how effectively each leader was in advancing their causes, the trends of each leaders support, the tactics each leader used, the concessions they achieved, the betterment of the Irish peoples lives and whether or not the leader actually achieved what they set out to gain all need to be compared and assessed. The important thing about the leaders of Ireland between 1801 and 1921 is that each had a struggle against the British for the betterment of Ireland, and in the last criteria we will focus on how close they were to achieving their aims if they did not actually achieve their aims. O'Connell was an expert at gaining mass support which was vital in his aim of Catholic Emancipation. To unify efforts for Emancipation the Catholic Association was created with a cheap membership fee called the Catholic Rent. By using open air meetings which were massive successes and the Church the Catholic Association O'Connell amassed support. All Catholics supported O'Connell and thanks to the Catholic Rent were able to show it. ...read more.

This was one of the toughest pieces of law-and-order to affect Ireland but was supported by Catholic Bishops because it reduced crime and violence. The two Irish Nationalist groups, Young Ireland and the Fenians, both had the sole purpose of forcing Irish independence. Young Ireland never had any intention of working with the British government so they did not gain any concessions, and the Fenians had much the same stance. For both groups, the main reason they did not receive any concessions is because they were violent groups and the British Government would not work with 'terrorists'. Parnell accepted that the only way to gain Home Rule was by legal means, but he was not always successful in Parliament, as shown in the passing of The Coercion Act of 1881. Parnell was willing to work with the government for reform in his earlier years and achieved the passing of the Second Land Act. When the IPP gained the majority of seats in Southern Ireland Gladstone accepted that Home Rule needed to be granted. Redmond finally got Home Rule through both the House of Commons and the House of Lords, thanks to the Parliamentary Act of 1911 however due to World War One, the bill was never enacted and in reality Redmond achieved very little. Although Redmond got Home Rule through Parliament, he never actually gained any important concessions. Sinn Fein managed to achieve Dominion Status for Ireland in 1921. This came about after Sinn Fein's huge rise in popularity, and the IRA's 'campaign of murder and harassment' against the British. In late 1920 and negotiation towards the Anglo Irish Treaty of 1921 began. The Irish were offered Dominion Status but only half of Sinn Fein accepted this, causing the party to split and civil war to break out. ...read more.

Redmond eventually grew ineffective and faded out of power with the emergence of Sinn Fein in 1916. Parnell was often referred to as 'The Uncrowned King of Ireland' due to his vast success' in parliament, and can be credited with finally opening up the Irish question to a government who would listen, as well as his achievements for Land Reform. He had huge support and by legally fighting for Home Rule, he improved the views of the Irish in parliament. O'Connell effectively stood against the government at a time where most Catholic politicians would have been unable to. His campaign for Catholic Emancipation was a huge success showing just how effective a politician O'Connell was, and was continued with concessions being granted afterwards. J.C. Beckett said that "No other single person has left such an unmistakeable mark on the history of Ireland", however I feel this statement is crediting O'Connell with too much. Although he achieved Emancipation O'Connell lost his effectiveness towards the end of his Repeal campaign and other leaders have caused consequences still felt in Ireland almost a century later. Sinn Fein were a highly effective group at advancing their causes, both politically and violently. Their use of violence succeeded where others failed, showing just how effective Sinn Fein was in comparison to other groups, and by gaining mass support they were able to fight their battles on the political front also. The Anglo-Irish Treaty of 1921 gave the Irish Dominion status which was the closest to independence that the British would offer. Lord Longford wrote "The British supremacy over Ireland first claimed in 1172 was virtually ended" in regards to the 1921 Treaty, which I believe is due to Sinn Fein's effectiveness when working against the British. Word Count: 2941 (including title) ...read more.