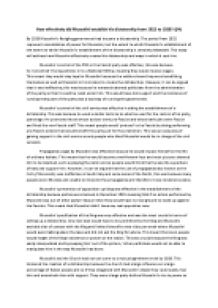 How effectively did Mussolini establish his dictatorship from 1918 - 1922?

Propaganda usage by Mussolini was effective because he would impose himself on the life of ordinary Italians. This meant that he would become a well-known face and most pictures showed him to be talented, such as playing the violin and so people would think that he was the superhero of Italy and support him. However, it can be argued that the use of propaganda also known as the Cult of Personality was ineffective in South Italy and some areas of the North, this was because many people were illiterate and unable to interpret the propaganda and therefore it was rendered useless. Mussolini?s prevention of opposition uprising was effective in the establishment of the dictatorship because parties were banned in December 1925 meaning that if an action performed by Mussolini was out of other partys? favours then they would have no real ground to stand up against the Fascists. ...read more.

Mussolini and the Church had not yet come to a mutual agreement even by 1928. This hindered the creation of a dictatorship because the church had a large influence on a large percentage of Italian people and so if they disagreed with Mussolini?s ideals they could easily rival him and overwhelm him with support. They were a large party before Mussolini?s rise to power as well which shows they can easily gather up support. However, agreements were made in 1929 which gave Mussolini the support of the church and now had no real opposition. To conclude, Mussolini?s establishment of the dictatorship was very effective. This was because he successfully removed the threat of any opponents by banning them and coming to terms on certain agreements and he also took control over most of the Italian citizens, including the military, civil servants and his own party. ...read more.