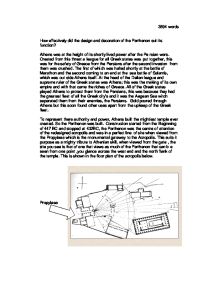 How effectively did the design and decoration of the Parthenon suit its function?

3594 words How effectively did the design and decoration of the Parthenon suit its function? Athens was at the height of its shortly lived power after the Persian wars. Created from this threat a league for all Greek states was put together, this was for the safety of Greece from the Persians after the second invasion from them was crushed. The first of which was halted shortly at the battle of Marathon and the second coming to an end at the sea battle of Salamis, which was out side Athens itself. At the head of the Delian league and supreme ruler of the Greek states was Athens; this was the making of its own empire and with that came the riches of Greece. All of the Greek states played Athens to protect them from the Persians, this was because they had the greatest fleet of all the Greek city's and it was the Aegean Sea witch separated them from their enemies, the Persians. Gold poured through Athens but this soon found other uses apart from the upkeep of the Greek fleet. To represent there authority and power, Athens built the mightiest temple ever created. So the Parthenon was built. Construction started from the Beginning of 447 BC and stopped at 432BC, the Parthenon was the centre of attention of the redesigned acropolis and was in a perfect line of site when viewed from the Propylaea which is the monumental gateway to the Acropolis. This suits it purpose as a mighty tribute to Athenian skill, when viewed from the gate, the site you see is that of one that views as much of the Parthenon that can be seen from one point ,you glance across the west end and the north flank of the temple. This is shown in the floor plan of the acropolis below. Propylaea It is positioned perfectly so the full unyielding flank is exposed for the spectator to look upon. ...read more.

Athena is the main statue, and in the palm of her hand stood Nike (shown in the image). This was a gesture of offering victories to the Athens. This links to the fact that the temple its self was built on the foundations of an earlier temple destroyed by the Persians in 480 BC, as the Persian victories kindled the Athenian rise to power. This image shows what the statue may have looked like the one in the Parthenon. In attempt to slow the cracking of the ivory that made up Athena's ivory skin, presidia's devised a pool of water or oil centred midway in the naos, this had two purposes. Firstly it was to keep the air moist to slow the cracking of the ivory in the statue and secondly to reflect the sun through the east entrance and light up the naos with shimmering light. Also it most defiantly would have added an addiction drama to the already over powering statue. The Parthenon is world renowned for its sculpture. Leading the design for the sculptures upon of was the artist Phidias who helped sculpture and advised all sculpture on the Parthenon. There were three main types of sculpture on the temple that were started on 447BC and completed in 432BC. With the theme of the mightiest temple ever built, the materials had to be fit for the gods, the material with which the Parthenon was built consisted of solid white Pentelic marble this was a fine white marble quarried on Mount Pentelicus near Athens. Twenty-two thousand tons of this marble was used. When the Parthenon was completed it glistened white and gold .Some of the financial accounts for the Parthenon survive, and show that the largest single expense was transporting the stone from Mount Pentelicus, about 16km from Athens. Unusually for Greek temple marble was also used for the roof tiles as well as the walls. ...read more.

Both gods offered a gift to the Athenians, Athena gave the olive tree and Poseidon created a salt-water spring. Athena was chosen and so the origin of the name of the city is created. All of these are freestanding sculpture with as much detail on the back of the sculpture as is on the front. This shows great pride and skill the sculpture had and also the thought that those gods see all and nothing can hide. The reason why Athena was patron begins with her and Poseidon. They both wanted to be the protectors of Athens. To decide this, the two gods had to create something valuable for Athens, Poseidon created a salt water spring and Athena created the olive tree. In the end it was the olive tree which won, as it was a symbol of peace and prosperity while a salt water spring did not have a lot of use. Athens was thenceforth named after the Goddess Athena, Ultimately the design and function of the Parthenon perfectly suited its function. This is because is stills stands as a monument to Athens's glory and past. The design of the temple was effective enough to stand for thousands of years and the decoration was crafted to a standard that is still admired today. The temple had many functions for many different reasons; each of these had been addressed and solved to a very high standard. From a temple to Athena, treasury for the state or a war memorial for the fallen at marathon, the Parthenon is a tribute to the Athenians that built it. These keys elements all combine to contribute to the purpose and function of the temple this being a symbol of their vast wealth, devoted religious worship, extraordinary craftsmanship and military supremacy all summed up into one building. So in effect the design and decoration of the temple suits in every way the functions put to it. Today the Parthenon remains as a symbol of the once great Greek culture, and the importance of the city of Athens. ...read more.