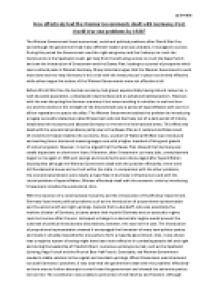 How effectively had the Weimar Governments dealt with Germany's Post World War one problems by 1928?

﻿Jack Pettitt How effectively had the Weimar Governments dealt with Germanys Post World War one problems by 1928? The Weimar Government faced economical, social and political problems after World War One and although the government had many different leaders and was unstable, it managed to survive. During this period the Government used the right-wing army and the Freikorps to crush the Communists in the Spartacist revolt, get help from the left-wing unions to crush the Kapp Putsch and saw the introduction of Stresemann and the Dawes Plan, leading to a period of prosperity which saw a cultural peak in Weimar Germany. Many historians argue that the Weimar Governments could have done more to help Germany in this crisis with the measures put in place not entirely effective, while others argue the actions of the Weimar Governments were not effective at all. Before World War One the German economy had grown exponentially having natural resources, a well educated population, a developed industrial base and an advanced banking system. However, with the war disrupting the German economy it lost areas resulting in a decline in coal and iron-ore and the decline in the strength of the Deutschmark saw a period of hyperinflation with over 6.6 billion reparations to pay to the allies. ...read more.

With the rejection of a constitutional monarchy and the introduction of the Weimar Government, Germany faced many political problems such as the introduction of proportional representation and the extreme left and right uprisings. General Erich Ludendorff, who was essentially the wartime dictator of Germany, became aware that Imperial Germany and an autocratic regime could not survive after the war. He hoped a change to a democratic regime would prevent the outbreak of political revolutionary disturbances; however, this was not the case. The introduction of proportional representation showed it encouraged the formation of many new splinter parties and made it virtually impossible for one party to form a majority government. Also, it was shown that a majority system of voting might have been more effective in combating attacks left and right and during the leadership of Friedrich Ebert, numerous uprising occurred, such as the Spartacist Uprising, Kapp Putsch and the Munich Beer Hall Putsch. Eventually, the Weimar Government needed a stable solution to the regular and constant uprisings. When Stresemann was introduced to tackle Germany?s problems, it was clear that the government dealt with the problems effectively as there was no further attempts to over throw the government and showed the extremist parties lost control. ...read more.

However, with France, Germany and Belgium accepting the existing borders, many Germans felt that the Locarno Treaty and Stresemann had brought disgrace and dishonour as they argued they were very restricted. Furthermore, France opposed it because they felt that they were not protected well enough from Germany. In comparison, the foreign affairs that Germany faced were not the most important part in the major problems the Weimar Government faced, but restricted Germany which led to later leaders wanting more control over land, causing further issues. In conclusion, the economic prosperity was limited and built upon unstable foundations which created a false image of prosperity and trust. However, with Germany in substantial debt and facing many crises, the government effectively dealt with the situation as Stresemann restored confidence and helped re-establish the structure and system of Germany. The most important problem Weimar Government solved was the economic crisis, as further tension and failure to meet demand for reparations would have led to possible violent solutions from the French. Overall, I think that the Weimar Government effectively dealt with the post war problems that Germany faced, even though the continuation of proportional representation allowed Hitler to become known on the political spectrum leading to the rise of Nazism. ...read more.