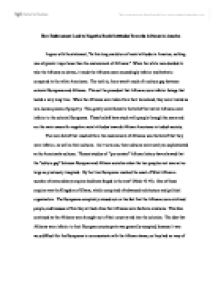 How Enslavement Lead to Negative Racial Attitudes Towards Africans in America.

How Enslavement Lead to Negative Racial Attitudes Towards Africans in America I agree with the statement, "In this long evolution of racial attitudes in America, nothing was of greater importance than the enslavement of Africans." When the white men decided to take the Africans as slaves, it made the Africans seem exceedingly inferior and barbaric compared to the white Americans. The truth is, there wasn't much of a culture gap between colonial Europeans and Africans. This set the precedent that Africans were inferior beings that lasted a very long time. When the Africans were taken from their homeland, they were treated as non-human pieces of property. This greatly contributed to the belief that native Africans were inferior to the colonial Europeans. These beliefs have stuck with people through the years and are the main reason for negative racial attitudes towards African Americans in today's society. ...read more.

This belief was passed on through generations, and still has not completely died out to this day. Another thing that contributed to the belief that Africans were inferior was that they were treated as non-human pieces of property. "Formerly a new source of trade, the continent now became transformed in the European view into the repository of vast supplies of human labor -- "black gold"" (Nash 44). The African slaves were given the nickname black gold because that is all the Europeans considered them to be. This is much different than the indentured servants because they were considered to be people, and of course were not bound to a life of servitude. The slaves became the lowest possible class. They even had a completely different set of laws than everyone else, called the "slave codes." A slave could not leave the plantation without carrying around written permission from his/her master. ...read more.