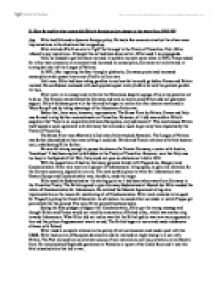 How far and by what means did Hitler's foreign policy change in the years from 1935-39?

Q. How far and by what means did Hitler's foreign policy change in the years from 1935-39?

Ans.        Hitler had followed a dynamic foreign policy. He had a few concrete aims but the others were improvisations in the situations that cropped up.

Hitler started off with an aim to 'right' the 'wrongs' in the Treaty of Versailles. First, Hitler refused to pay reparations. Although this act had been done earlier, Hitler used it as propaganda.

Next, he needed to get Germany rearmed. A suitable moment came when in 1933, France asked for a four-year extension on armament and increased its conscription; Germany not only started re-arming but also left the League of Nations.

In 1935, after regaining the Saar through a plebiscite, Germany proclaimed increased conscription and a peace-time army of half a million men.

Until now, Hitler had been taking gambles to see how far he could go before France and Britain resisted. His confidence increased with each psychological victory before he took the greatest gamble till then.

Hitler went on to occupy and militarize the Rhineland, despite urgings of his army generals not to do so. The French overestimated the Germans and took no action since Britain did not guarantee support. Hitler's boldness grew a lot by this and he began to realize his other dreams mentioned in 'Mein Kampf' and by taking advantage of the Abyssinian-Italian war.

Before that, there were, however, repercussions. The Stresa Front by Britain, France and Italy was formed to stop further encroachments on Versailles. However, all it did was confirm Hitler's suspicion that “there is no cooperation between Europeans, only submission”. This was because Britain itself signed a naval agreement with Germany that allowed a much larger navy than stipulated by the Treaty of Versailles.

The Stresa Front was effectively killed when Italy attacked Abyssinia. The League of Nations was further discredited as there was nothing it could do. British and French relations with Italy became cool, emboldening Hitler further.

He now felt strong enough to pursue his dream of a Greater Germany, a union with Austria, 'Anschluss'. It had been explicitly forbidden in the Treaty of Versailles. However, now that Italy was too busy in the Spanish Civil War, Italy could not pose an obstacle as it did in 1934.

With the acquisition of Austria, Germany gained a border with Yugoslavia, Hungary and Czechoslovakia. Hitler now went on in pursuit of 'Lebensraum', living space, to gain raw materials for the German economy, especially iron ore. The most suitable place to attain for Lebensraum was Eastern Europe and Czechoslovakia was, therefore, made the target.

Hitler used the Sudetenland as  the starting point as it had been taken away from Germany in the Versailles Treaty. The British agreed to give Germany Sudetenland at Munich but Hitler needed the whole of Czechoslovakia for Lebensraum. He violated the Munich Agreement citing slow implementation as the reason for swallowing all of Czechoslovakia. Hitler went onwards in his quest for Prague by giving the Czech Chancellor an ultimatum: he could either surrender or watch Prague get pummeled into the ground. This way, Hitler gained Czechoslovakia.

Seeing the false pledges of support for Czechoslovakia, Hitler got the wrong message and thought Britain and France would not mind the annexation of Poland either, which was another step towards Lebensraum. What Hitler did not realize was that the British public was now very opposed to him and the policy of appeasement was at an end. The British began to rearm and made a defensive alliance with Poland.

Hitler made a complete reversal on his policy of anti-communism and made a pact with the USSR. Hitler had an aim of European domination and he realized he might end up in a war with Britain. The Pact allowed him an alternate source of raw materials as well as protection on his Eastern front. He miscalculated England's guarantees to Poland as a repeat of the Czech farce and it was this fatal miscalculation that led to war.

Thus, it can be seen that Hitler started off with only one concrete aim, to break down the Treaty of Versailles. After that, seeing the strength of the German military and how intimidated the Western Powers were, he went on to fulfill his Mein Kampf dreams such as Anschluss and Lebensraum. He was prepared to change his foreign policy dramatically to suit his agenda and to achieve his aim of domination in Europe, as was evident by the Nazi-Soviet Pact of 1939.