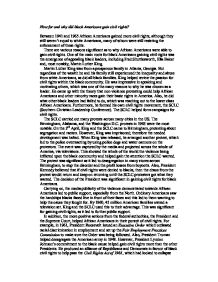 How far and why did black Americans gain civil rights?

How far and why did black Americans gain civil rights? Between 1941 and 1965 African Americans gained more civil rights, although they still weren't equal to white Americans, many of whom were still resisting the enforcement of these rights. There are various reasons significant as to why African Americans were able to gain civil rights. One of the main roots for black Americans gaining civil rights was the emergence of appealing black leaders, including Fred Shuttlesworth, Ella Baker and, most notably, Martin Luther King. Martin Luther King was from a prosperous family in Atlanta, Georgia. But regardless of the wealth he and his family still experienced the inequality and abuse from white Americans, as did all black families. King helped revive the passion for civil rights within the black community. He was impressive in speaking and motivating others, which was one of the many reasons to why he was chosen as a leader. He came up with the theory that non-violence protesting could help African Americans and other minority races gain their basic rights in America. ...read more.

The decision of the President was significant in gaining civil rights for black Americans. Carrying on, the media publicity of the violence demonstrated towards African Americans led to public support, especially from the North. Ordinary Americans saw the hardships blacks faced live in front of their faces and this led to them wanting to help the cause they fought for. By 1960, 45 million American families owned a television set. King and the SCLC used this to their advantage. This was significant for gaining civil rights, as it led to further public support. In addition, the more positive actions from the federal authorities, the President and the Supreme Court, helped African Americans in their pursuit of civil rights. For example, in 1961, President Roosevelt issued an Executive Order which outlawed racial discrimination in employment and set up the Fair Employment Practices Commission to make sure the Order was being followed. Also, President Truman helped desegregate the American army in 1948. However, President Lyndon Johnson's commitment to the black cause helped gain civil rights more than the other Presidents. ...read more.

The change in the Supreme Court also highlighted the significance of the NAACP, in their legal strategy of bringing cases to the Supreme Court. A further significant case brought forward by the NAACP was Smith v Allright (1944). The Supreme Court banned white primary in Texas. Therefore, black voters rose from just 2% in 1940, to 12% in 1947. In conclusion, African Americans did gain more civil rights between 1941 and 1965. This was mainly due to the surfacing of powerful black leaders, such as Martin Luther King, who exploited the racist white Southerners to the rest of the world through the media, gaining the much need public support. This included the support of various Presidents, who were also committed to the cause and were vital in helping African Americans gain civil rights. The Supreme Court was too significant in helping blacks by avoiding miscarriages of justice, when the NAACP brought forward cases which illustrated the denial of rights to blacks. The civil rights groups worked together, using peaceful protests and demonstrations to gain the support of the federal authorities and the general public and achieve the aims of their cause, in gaining African American civil rights. ?? ?? ?? ?? ...read more.