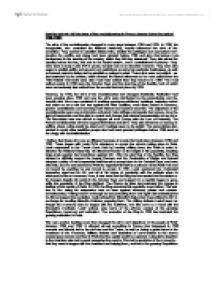 How far and why did the aims of the revolutionaries in France change during the period 1789-1793?

How far and why did the aims of the revolutionaries in France change during the period 1789-1793? The aims of the revolutionaries changed in many ways between 1789 and 1793. In 1789, the bourgeoisie, who controlled the National Assembly, heavily influenced the aims of the revolution. They wanted to establish laissez-faire, abolish the privileges and exemptions from taxation the nobility and clergy had been granted before 1789 and give themselves more involvement in the running of the country, which they felt they deserved. They also aimed for equality before the law, and end to the feudal system, and a constitutional monarchy - they were keen to keep Louis XVI in power, but just not as an absolute monarch. They were also eager to abolish guilds and government restrictions on entry into particular businesses, as well as internal customs duties and to establish a national market. These aims were not radical - as demonstrated by the cahiers, which showed the liberal aristocrats to be more radical than the Third Estate! Demands were also much less radical than they became in 1792. The most radical events in 1789 were the October Days and the storming of the Bastille, both of which were tremendously less radical than the events that took place by 1793. ...read more.

The military defeats made it seem as though the monarchy were in league with the Austrians, and this came to a head with the Brunswick manifesto. Louis' actions were some of the primary causes of the growing Republican movement and radicalism. The execution of the King in 1792 demonstrated the growing radicalism in Paris. War was another leading event that changed the aims and objectives of the people of Paris between 1789 and 1793. It affected almost everything in France that happened in 1792 onwards and directly led to the civil war and the Terror, as well as being a great factor in the overthrow of the monarchy. Military defeats and desertions of commanders to the enemy created great tension and fear in Paris that the capital would be captured. Lafayette's desertion to the Austrians also led to panic sweeping the country. War led to suspicion of the monarchy - that they were in league with the Austrians and helping them, and led to the growing Republican movement as the moderates were weakened by Louis vetoes and seemingly less than committed attitude towards winning the war, whereas the sans-culottes' argument seemed much more credible and was much more popular. ...read more.

This was the same with the uprisings in Lyon and other federal towns. It was hard enough for the Convention to fight a war against the First Coalition and revolt from towns in France and counter-revolutionaries meant that odds of winning the war would be reduced further. Because of this, policies had to be adopted in order to crush these revolts to concentrate on the war before dealing with the problems within the country. This reason, along with war, the blunders and actions of the monarchy and the rise of the Jacobins and sans-culottes resulting in the weakening of the royalists and moderates led the bourgeois aims of 1789 - equality, laissez-faire, no internal customs, guilds, or privileges and exemptions, an end to the feudal system and a constitutional monarch granting them more power to run the country with - to change into the sans-culotte dominated aims of 1793, where control and order was needed in order to remove both internal and external enemies from France. The country aimed now to become a popular democracy with the right of insurrection and universal male suffrage - and if one was not a supporter of the radical demands of the revolution, one was removed from the country in order to regain control. ...read more.