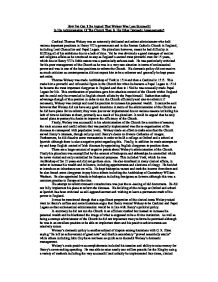 How Far Can It Be Argued That Wolsey Was Less Successful

How Far Can It Be Argued That Wolsey Was Less Successful In His Administration Of The Church Than In His Other Domestic Arrangements? Cardinal Thomas Wolsey was an extremely dedicated and ardent administrator who held various important positions in Henry VII's government and in the Roman Catholic Church in England, including Lord Chancellor and Papal Legate. His pluralism however, meant he had difficulty in fulfilling all of his ambitions due to a lack of time. Yet he was obviously a good manager of secular and religious affairs as he continued to stay as England's second most powerful man for 15 years, which due to Henry VII's fickle nature was a particularly arduous task. He was particularly criticised for his poor management of the Church as he was in a very rare situation in terms of ecclesiastical power and was in one of the best positions to reform the Church. His domestic policy did not receive as much criticism as contemporaries did not expect him to be a reformer and generally he kept peace and order. Thomas Wolsey was made Archbishop of York in 1514 and then a Cardinal in 1515. This made him a powerful and influential figure in the Church but when he became a Papal Legate in 1518 he became the most important clergyman in England and then in 1524 he was unusually made Papal Legate for life. This combination of positions gave him absolute control of the Church within England and he could only be overruled in English church affairs by the Pope himself. ...read more.

Wolsey's main positive accomplishments included his taxation and ability to raise money for Henry's never ending spending. He was able to raise nearly one million pounds for the King by using a variety of methods including the very successful land subsidy he implemented four times, clerical taxation, "loans" and the old tax of fifteenths and tenths. Unfortunately as is the case with so many of Wolsey's achievements there is a negative reverse side to them. The loans he extracted from various people were supposed to be repaid but they never were and this increased resentment against taxation from people. This was also strengthened by the amount people had to pay from the land subsidy. In 1525 there was a taxation disaster named the Amicable Grant, which due to the high amount of forced tax it implemented, caused unrest and revolt in various areas of England and which Henry had to apologise for and blamed Wolsey for. Also Wolsey was not particularly successful in attaining the sums of money Henry wanted for his invasions of France from Parliament. Although criticism of Wolsey cannot be too harsh as it is the pressure of Henry's continual costly desire to attack France that led to him designing the Amicable Grant and also in being forced to request grants from Parliament that he knew would not be possible. Wolsey did a successful job in fiscal management but was never able to make the Crown run at a profit because of Henry's restarting of offensive campaigns against France. ...read more.

The degree by which it was more productive is not particularly large though as Wolsey's domestic policy was not particularly groundbreaking or spectacular. Wolsey was a keen and proficient administrator domestically and he was mainly expected to keep law and order and the status quo which he was relatively successful. The only major unrest was caused by the Amicable Grant which Wolsey was forced to try because of Henry's intense wish to attack France. This is unfortunately a major problem for Wolsey as he was not given the free reign that A. F. Pollard describes, of having "prime-ministerial" powers, all the time and some of his unpopular decisions were because of Henry's fervour for war. Wolsey's domestic policy was also dominated by a desire to keep power to himself and make sure the nobles understood he could punish them and they could not hurt him, which they were not able to do until Anne Boleyn's faction succeeded in bringing about Wolsey's downfall in 1529. Wolsey was guilty as well of taking advantage of his secular power in increasing his income by making sure nobles gave him "gifts" but to a lesser extent than in the Church as there he could implement new taxes for himself which he could not do in the secular realm. This in a way shows less corruptness on his part domestically than ecclesiastically. Wolsey has been more harshly criticised for his failure to reform the Church and his blatant profiteering there than in his domestic administration which was relatively successful in a short term point of view but made no major long term mark on history. ...read more.