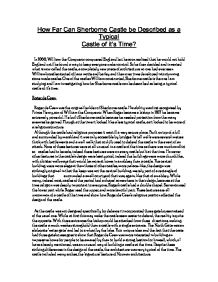 How Far Can Sherborne Castle be Described as a Typical Castle of it's Time?

How Far Can Sherborne Castle be Described as a Typical Castle of it's Time? In 1066, William the Conqueror conquered England but he soon realised that he would not hold England until he found a way to keep everyone under control. So he then decided and invented what is now called the castle, a completely new piece of architecture no one had ever seen. William's castles started off as a motte and bailey and then over time developed into stunning stone made castles. One of the castles William constructed, Sherborne castle is the one I am studying and I am investigating how far Sherborne castle can be described as being a typical castle of it's time. Roger de Caen. Roger de Caen was the original builder of Sherborne castle. His ability was first recognised by Prince Henry, son of William the Conqueror. When Roger became a bishop in 1107 he became extremely powerful. He built Sherborne castle because he needed protection from the many enemies he gained. Though at the time it looked like a less typical castle, as it looked to be more of a religious structure. Although the castle had religious purposes it was till a very secure place. ...read more.

upgrading the defences of the castles walls and towers, these improvements included strengthening of the north gate, as King John saw this as a potential weakness. These changes are not unusual because, with the growing political tension in England, there was a chance of civil war and so the King decided to upgrade the defences of Sherborne, as he did to many other castles under his control. These improvements to the defences continued under the next king, King Henry III who was also unpopular with the barons . In 1267 the king appointed his son Edmund to the castle. Edmund made many changes and built many new buildings on the west side of the Great Tower, including a new stair leading to the Great Tower. These new buildings effectively doubled the size of the castle. These changes, although slightly earlier than in other castles, are a good example of how many castles at the time were being customised so they were easier to live in. The Return of the Bishops. Almost hundred years later in 1355 the castle was given back to the Bishops of Salisbury. They held it for the next two hundred years and made several alterations. ...read more.

This final development in the castle's history was perhaps the most typical as 150 other castles suffered the same fate. The Digby family were given back the castle grounds where they lived in the new castle and kept the ruins of the old castle as part of their expansive gardens. In Conclusion. Sherborne Castle is a very interesting landmark to investigate the typicality of because, in castle terms, it is practically unique. It was not only built by Roger de Caen, a priest, a chancellor and an unlikely castle owner, but has been owned over the years by several monarchs and possibly the most famous Knight ever, Sir Walter Ralegh. It comes as no surprise then that the history of Sherborne Castle is very unlike most other castles. While at first everything about it was unusual, its owner, design and layout, over the next five centuries the changes wrought upon it became more and more typical for changes made during their respective periods before, finally, in the present day the castle has the same fate as almost every other castle, it is a ruin owned by the National Heritage. Therefore I must com to the conclusion that the typicality of Sherborne Castle increased over time so from unique root it grew and grew in typicality until it has today became the same as every other castle. ...read more.