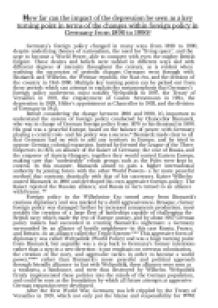 How far can the impact of the depression be seen as a key turning point in terms of the changes within foreign policy in Germany from 1890 to 1990?

﻿How far can the impact of the depression be seen as a key turning point in terms of the changes within foreign policy in Germany from 1890 to 1990? Germany?s foreign policy changed in many ways from 1890 to 1990, despite underlying themes of nationalism, the need for ?living space?, and the urge to become a World Power, able to compete with even the mighty British Empire. These desires and beliefs were tackled in different ways and with different degrees of intensity throughout the century, as is evident when studying the succession of periodic changes Germany went through with Bismarck and Wilhelm, the Weimar republic, the Nazi era, and the division of the country in 1945-1990. Multiple key turning points can be picked out from these periods which can attempt to explain the metamorphosis that Germany?s foreign policy underwent, most notably Weltpolitik in 1897, the Treaty of Versailles in 1919, the employment of Gustav Stresemann in 1924, the depression in 1929, Hitler?s appointment as Chancellor in 1933, and the division of Germany in 1945. Before considering the change between 1890 and 1990, it?s important to understand the system of foreign policy conducted by Chancellor Bismarck, who was in charge of German foreign policy from 1870 to his dismissal in 1890. ...read more.

On the other hand, Stresemann was in no way seeking a friendship with the Allies, rather he conceded that the best way he could take back lost colonies was through peaceful exchanges**, though he too detested the treaty, and in fact he was continuing the idea of Weltpolitik in the only way he could, reverting temporarily back to more Bismarckian methods of foreign policy in order to achieve his goals, and this ended with his death- so although the Dawes Plan and re-building of Franco-German Relations earned him the Nobel peace prize and arguably saved Germany from its darkest days of hyperinflation, his lasting impact on German Foreign policy was debateable. Despite Stresemann?s efforts to improve the economy, it was still balancing on a knife?s edge until 1929- the Wall Street Crash. The collapse of the largest American stock market made waves throughout the entirety of the Western World, starting the decade long Great Depression, and Germany was hit the hardest.*** In addition to its already incredibly fragile economy, Germany had been relying on America for financial aid since the implementation of the Dawes plan, and later, the Young Plan. American banks immediately withdrew their loans and Germany was suddenly faced with extreme hyperinflation, to the point where even vast quantities of money became virtually worthless. ...read more.