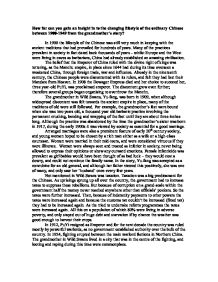 How far can you gain an insight in to the changing lifestyle of the ordinary Chinese between 1900-1949 from the grandmother's story?

How far can you gain an insight in to the changing lifestyle of the ordinary Chinese between 1900-1949 from the grandmother's story? In 1900 the lifestyle of the Chinese was still very much in keeping with the ancient traditions that had prevailed for hundreds of years. Many of the practices prevalent in society in fact dated back thousands of years - whilst Europe and the West were living in caves as barbarians, China had already established an amazing civilisation. The belief that the Emperor of China ruled with the divine right of kings was tottering, as the Manchu empire, in place since 1644 had during its time overseen a weakened China, through foreign trade, war and influence. Already in the nineteenth century, the Chinese people were discontented with its rulers, and felt they had lost their Mandate from Heaven. In 1908 the Dowager Empress died and her choice to succeed her, three year-old PuYi, was proclaimed emperor. The discontent grew even further; therefore several groups began organising to overthrow the Manchu. The grandmother in Wild Swans, Yu-fang, was born in 1909, when although widespread discontent was felt towards the ancient empire in place, many of the traditions of old were still followed. ...read more.

All of the other available food was exported to Japan or given to the rich and the Japanese troops that inhabited the city. The family move to a better neighbourhood and start to feel the real effects of the tight Japanese rule. The young daughter begins school, and it is made clear the tight control the Japanese keep on the education. The language and teaching was in Japanese, and most of the teachers were Japanese. The pupils were taught to be obedient subjects of Manchukuo, and that it was a paradise on earth. However, this was not so for the locals, whose schools were nothing compared to those of the Japanese children. Locals were treated as inferior, and had to bow to Japanese people in the street. Although many local people at first believed PuYi had no knowledge of the atrocities going on, they soon began to think otherwise. The grandmother's family in Wild Swans begin thinking of PuYi as a 'tyrant' when they see how badly labourers are treated, and a man they meet is killed for eating anything other than the allotted acorn meal. Also, the grandmother's husband's son is branded a 'thought criminal' and killed when he, as a schoolteacher, forgets to bow to a portrait of PuYi one morning. ...read more.

The grandmother's story gives great insight in to the way a woman of her age, class and situation would live. However, one woman's story is just that; it cannot really reflect on the life other people in China were treated or the situation they were in. Although at one point the grandmother is very poor, through most of her life she is luckier than many people in China at that time, and the fact that she lives in Manchuria means that her story only shows what it was like for those living under Japanese occupation. In other parts of China, the Kuomintang had taken over much earlier, and other countries saw Chaing Kai-shek as the leader of China from much earlier on. Also, there are periods of historical importance in which the grandmother is separated from society, and so cannot comment on the proceedings. However, in terms of giving an insight in to the lives of those ordinary people around her, the grandmother's story is invaluable in that it allows the reader to gain knowledge from a sensitive point of view, rather than having just a description of the historical proceedings. Another advantage of having the grandmother's account is that she has quite an eventful and fluctuating life, and can also give the point of view of a the changing roles of women in society. ...read more.