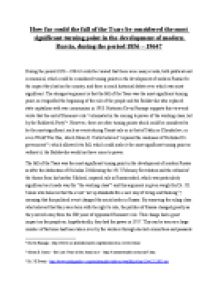 How far could the fall of the Tsars be considered the most significant turning point in the development of modern Russia, during the period 1856 1964?

had increased by three fifths over output in 1932?[11]. This was definitely necessary to do before the war as Stalin had to equip Russia?s large army, so had to modernise the country industrially. It could also be seen that Stalin?s politics regarding the Five Year Plans modernised the education of Russia as the initial ideas of Lenin and the Bolsheviks included an ?attack on book learning and traditional academic standards?[12]. This then meant that during the time of Stalin, people were entering the work place with inadequate education. To address this problem, Stalin introduced a new education system during the 1930s, which included ten years of compulsory education for children and a curriculum which taught the key subjects, so that they were prepared to join the workforce and help modernise Russia. Additionally, it has been suggested that it was Khrushchev?s reign from 1953 and not that of the Bolsheviks which was a key turning point in the development of modern Russia as Khrushchev criticised Stalin for his personality cult and therefore, the de-Stalinisation of the Soviet Union began. This view is supported by Glenn E. Curtis, ?Khrushchev denounced Stalin's tyrannical reign in 1956?[13] as he was ?signalling a sharp break with the past?. This sharp break from the past can be seen when considering the 1962 Cuban Missile Crisis because this event could be viewed as the beginning of the end of the Cold War, as a consequence of Khrushchev attempting to install missiles ...read more.