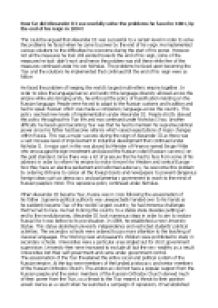 How far did Alexander III successfully solve the problems he faced in 1881, by the end of his reign in 1894?

﻿How far did Alexander III successfully solve the problems he faced in 1881, by the end of his reign in 1894? This could be argued that Alexander III was successful to a certain level in order to solve the problems he faced when he came to power by the end of his reign. He implemented various solutions to the difficulties he overcome during the start of his power. However not all the measures he took still existed towards the end of his reign, some of the measures he took didn't work and hence the problem was still there while few of the measures continued under his son Nicholas. The problems he faced upon becoming the Tsar and the solutions he implemented that continued till the end of his reign were as follow: He faced the problem of keeping the world?s largest multi-ethnic empire together. In order to solve the language barrier and restrict the language diversity allowed across the empire while also bringing unity, he enforced the policy of Russification insisting on the Russian language. People were forced to adapt to the Russian customs and tradition and had to speak Russian which was made a compulsory language across the country. ...read more.

Universities were a particular area singled out for strict government supervision. University fees were increased to exclude all but the very wealthy as a result Universities lost their self government and came under government control. The assassination of the Tsar threatened the entire social and political system of the Russian empire. At the top were members of the landed aristocracy and senior members of the Russian Orthodox Church. The aristocracy did not have a popular support from the Russian people and the senior members of the Russian Orthodox Church derived much of their power from the Tsar, so a threat to the Tsar meant a threat to their position aswell. Hence as a result when he launched a campaign of repression, it had abolished support from the upper levels of Russian society. This carried on through his Tsar life until 1894, by the time of his death his liberal minister Konstatin Pobendonostev who was the chief Procurator of the Holy Synod of the Russian Orthodox Church who played a vital role in dominating immense power and was very influential. He was the person who masterminded Alexander III Manifesto. Pobendonostev believed that basis of political and social stability lay in support for autocracy, the Russian Orthodox Church and Russian nationalism. ...read more.

His first finance minister Nikolia Bunge implemented laws which reduced the tax burden on peasants. He also established a Peasant Land Bank, which offered loan facilities to peasants to help them increase the size of their landholdings and make them more productive. He funded them money to settle themselves in the regions that were less capable of providing grains so that they could resolve the issue and improve the conditions. But towards the end of his reign, In the countryside, peasant outbreaks increased due to increasing land shortage. The peasant population continued to grow and their problems seemed to be worse than before. Pressure on the land use meant that the increasing peasant population had less hand per family to feed themselves. The land issue in Russia rose into a violent unrest in the early years of twentieth century. As a result the shortage of peasant landholdings continued to be a problem. As a conclusion, although the autocratic Tsar was successful in using repression to keep his autocratic position safe and he found a solution to all his problems that he was facing during the start. However, most of them didn?t last till the end of reign hence the problems still occurred and even continued till his son Nicholas II came in power. ...read more.