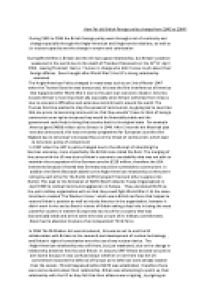 ﻿How Far did British Foreign policy change from 1945 to 1964? During 1945 to 1964 the British foreign policy went through a lot of continuity and change especially through the Anglo-American and Anglo-soviet relations, as well as its nuclear capacity and the change in empire and colonisation. During World War 2, Britain and the US had a good relationship, but Britain's position weakened in the world due to the death of President Roosevelt on the 12th of April 1945 , leaving President Harry s. Truman in charge who didn?t know much about their foreign affaires . Even thought after World War 2 the US's strong relationship remained. The Anglo-American Policy changed in many ways such as on 3rd of March 1947 when the Truman Doctrine was announced, this was the first interference of America that happened after World War 2 due to the post-war economic disaster. America became Britain's most important ally especially when Britain withdrew from Greece due to economic difficulties and extensive commitments around the world. The Truman Doctrine wanted to stop the spread of communism, by giving aid to countries that are prone to becoming communist so that they wouldn?t have to think of being a communist as an option because they would be financially stable and the government could help to bring that country back to its original state. ...read more.

as a Soviet spy , which made the US more wary about sharing information , as Britain had nothing to offer the US ( bombs etc. ) . A US congressman pointed out that America 'would be exchanging a horse for a rabbit ?, in other words it wasn?t worth sharing information with the UK because they didn't have anything to offer, even thought Britain tried hard to make itself worthy of their nuclear relationship again by creating an atomic bomb, but the US had already created their first thermonuclear device, the technology gap grew too much that there was no going back. Most of all the Anglo-American relationship was shown during the Korean War 1950-53 , as Britain proved the second largest amount of troops, to prevent Communist aggression in South Korea, this strengthened their relationship. An event that strained Anglo-American relations was the Suez Crisis in 1956 as America Criticized Britain?s actions. The relationship weakened because the US told Britain to withdraw their troops from the Suez and they did because it was very humiliating for them due to the fact that America was threatening to stop all aid if they didn?t, because they thought that the Suez ?war? was unjustified. ...read more.

In addition in 1948 to 1949 the Berlin Blockade was another reason that created change in the Anglo-Soviet relationship as the soviet blocked all routes into Berlin in attempt to bring Berlin under Soviet control. The Blockade hardened the attitude toward the Soviet Union; therefore Britain didn?t really attempt to negotiate anything with the USSR in May 1949 when they held a conference with them. Furthermore there was also a change in empire and decolonisation starting from 1947 with India. Britain was economically very weak after the war and had many commitments around the globe that it could no longer support, as it was no longer able to afford its military .Even though this was the case Britain could not let go of the Middle East that easily as it was an economic necessity due to its huge amount of oil supplies .Rapid decolonisation started in the 1960's particularly in Africa with 17 colonies gaining independence from 1960 to 1964. Overall the British foreign policy changed in many ways as well as continuing their good relationship with America. It reached a conclusion of the fact that Britain?s policy changed immensely especially the Anglo-American relationship that changed overtime from being very strong to weaker. The area of most Continuity is the Anglo ?soviet relationship as even though it changed numerous amounts of time, in the end they were still on bad terms. ...read more.