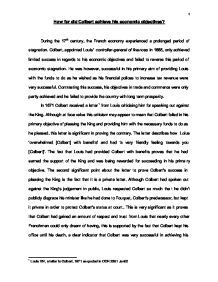 How far did Colbert achieve his economic objectives?

How far did Colbert achieve his economic objectives? During the 17th century, the French economy experienced a prolonged period of stagnation. Colbert, appointed Louis' controller-general of finances in 1665, only achieved limited success in regards to his economic objectives and failed to reverse this period of economic stagnation. He was however, successful in his primary aim of providing Louis with the funds to do as he wished as his financial polices to increase tax revenue were very successful. Contrasting this success, his objectives in trade and commerce were only partly achieved and he failed to provide the country with long term prosperity. In 1671 Colbert received a letter1 from Louis criticising him for speaking out against the King. Although at face value this criticism may appear to mean that Colbert failed in his primary objective of pleasing the King and providing him with the necessary funds to do as he pleased, this letter is significant in proving the contrary. The letter describes how Loius 'overwhelmed [Colbert] with benefits' and had 'a very friendly feeling towards you [Colbert]'. The fact that Louis had provided Colbert with benefits proves that he had earned the support of the King and was being rewarded for succeeding in his primary objective. The second significant point about the letter to prove Colbert's success in pleasing the King is the fact that it is a private letter. Although Colbert had spoken out against the King's judgement in public, Louis respected Colbert so much that he didn't publicly disgrace his minister like he had done to Fouquet, Colbert's predecessor, but kept it private in order to protect Colbert's status at court.. This is very significant as it proves that Colbert had gained an amount of respect and trust from Louis that nearly every other Frenchmen could only dream of having, this is supported by the fact that Colbert kept his office until his death, a clear indicator that Colbert was very successful in achieving his primary economic objective. ...read more.

In 1679 the receipts of France totaled 126,132,816 livres compared to only 48,053,826 in 1663, so it is clear that Colbert was extremely successful in raising revenue to accommodate expenditure. Similarly in the years 1662 to 1680, the annual budget was in surplus 11 years compared with 8 years in deficit, and although the largest deficit of 4,204,655 livres appears to be a large number it is only a tiny fraction of the deficit in the decades after Colbert. By 1714, over 30 years after Colbert's death so bearing no reflection on his policies, the King's deficit was 227,943,589 livres9, which is a testament to the extreme success which Colbert enjoyed as he was able to predominantly keep the budget in the green. Therefore it is clear that Colbert enjoyed significant success in achieving his economic objective of increasing revenue and keeping the King's finances healthy. Colbert aimed to increase the prosperity of France both short and long term, however as Historian Robin Briggs argues 'by the time of Colbert's death in 1683 many of his projects were virtually abandoned'10. This is important because Colbert had to reverse many of successful schemes he had implemented at the beginning of his time in power, which would have helped improve France in the long term, for example 'the abolition of 20,000 purchasable offices'11. To begin with this reform was significant in helping Colbert achieve his economic objectives as those who bought the offices became exempt from tax, so by abolishing them he could increase tax revenue and help secure long term prosperity for France. However, Louis made sure that Colbert's primary aim was to provide the State with the necessary money by any means, and due to a series of expensive wars Colbert had to begin selling offices again to increase revenue during wartime. This is supported by the social unrest in 1675. William Beik provides evidence to support Colbert reversing his good policies: 'These were protests against a series of new direct taxes created by Colbert to help finance the Dutch War'12. ...read more.

This source also raises the issue of the Dutch War, which the tariffs were a contributing factor enticing the Dutch to retaliate. The huge costs of the war crippled the French economy in the following decades, and as Colbert had supported the war because of his desire to surpass the Dutch, it is clear that he not only failed in his objectives to increase trade to levels above those of the Dutch but it also led to him completely failing to secure long term prosperity for the country as the economy never truly recovered from the costs of the war. Fran�ois Bluche describes how Colbert tried to change the attitudes towards nobles trading, ' A Colbertian ordinance of 1669 announced, but to not avail, that merchant endeavour did not demean noble status'16. This was a serious failure for Colbert as the nobles were the best educated and best placed financially to trade overseas, however despite his continued efforts Colbert could not overturn the prejudice provoked from noble d�rogeance which prevented nobles from being a part of French commerce. This was the biggest failure of Colbert in regards to his commerce objectives, he was never able to get the French nobility to imitate the successful English gentry. To conclude, it is impossible to categorise all of Colbert's economic objectives together. There is two distinctive groups with completely different amounts of success. It is clear that Colbert was extremely successful in addressing the financial needs of the King, by substantially increasing the tax revenue by keeping the deficit minuscule in comparison to later years. However, Colbert had objectives that had to take a back seat to the King's needs, and as a consequence Colbert didn't go very far at all in achieving his objectives for the long term prosperity of France, as he had to reverse his promising policies, and he only enjoyed limited success with his commerce objectives. Overall, because his primary objective was to address the financial needs of the King, it is fair to say that Colbert was successful. ...read more.