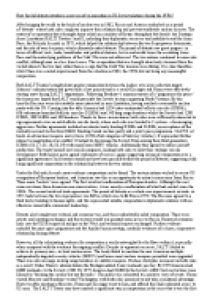 How far did dtente introduce a new era of co-operation in US-Soviet relations during the 1970s?

ï»¿How far did détente introduce a new era of co-operation in US-Soviet relations during the 1970s? After bringing the world to the brink of nuclear war in 1962, Russia and America embarked on a period of ‘détente’ where both sides sought to improve their relationship and prevent worldwide nuclear disaster. The extent of co-operation that it brought about relied on a number of factors throughout the decade: the Strategic Arms Limitation (SALT) Treaties I and II, including their diplomatic successes and inability to end the Arms Race; the Helsinki Accords in 1975, which helped the relationship between the two Superpowers deteriorate, and the role of wars by proxy, which ultimately ended détente. The period of détente saw great progress in terms of official visits, trade, handshakes and political rhetoric, but in real-world terms the escalating Arms Race and the underlying problems of the Cold War were not addressed. The two nations continued to come into conflict, although now in a less direct sense. The co-operation that was brought about only stemmed from the vested interests the two had, rather than as a sign that the Cold War tensions were fading. It is clear therefore whilst there was a noted improvement from the situation in 1962, the 1970s did not bring any meaningful cooperation. ...read more.

The treaty failed to mention the new American multiple independently-targeted re-entry vehicles (MIRVs) and hence most nuclear weapons permitted were upgraded. There was also no range on long range bombers or satellite weapons. Nuclear stockpiles increased on both sides as a result. Under Nixon?s administration the Pentagon added 3 new warheads per day. By 1973 America had 6,000 warheads, to the Soviets 2,500. By 1977 America had 10,000 to the Soviets 4,000. Such restrictions were likened to ?freezing the cavalry but not the tanks?. The public was submitted to a positive view of events. Nixon visited Moscow and Brezhnev visited Washington, with both sides promised to not take a unilateral advantage. However after meeting in Moscow, Nixon and Kissinger went to Iran, and offered the Shah unlimited access to US arms. The SALT I Treaty may have marked a significant step in cooperation in the sense that it was the first official agreement for years, but it did very little to address the tangible dangers and problems of the Cold War. Thus its cooperation did not have the capability to tackle the increasing risk of conflict. As with its predecessor, SALT II was negated by loopholes and flaws, greatly limiting the cooperation brought about. ...read more.

After withdrawing from SALT II he encouraged a boycott of Moscow Olympics. By this point even diplomatic cooperation was out of the question. He increased arms spending, and his successor Ronald Reagan was elected mainly on campaign of anti-Russian policies. This brought the flawed period of détente, along with its unfulfilled aims of cooperation, to a close. In conclusion, every significant agreement and treaty failed to effectively halt the arms race or fully discourage aggression or conflict. It introduced cooperation only in the most political and restrictively official terms. The arrival of Ronald Reagan and the situation in Afghanistan conclusively ended cooperation, and splits in the Communist bloc apparent then and would lead to its collapse. The failure of détente can be largely put down to problems from the start; the US misunderstood détente as simply a relaxation of tension whilst the Soviets considered the class war between communism and capitalism to be ongoing. Thus they never fully expected long lasting cooperation, explaining why it did not result. This is apparent in the insincere Russian acceptance of the third basket in the Helsinki accords. Whilst cooperation did improve economically and diplomatically, the very real threat of nuclear war did not fade during the 1970s. As such, détente’s flaws encouraged the development of indirect wars that merely opened a new channel (of conflict not of cooperation) during the Cold War. ...read more.