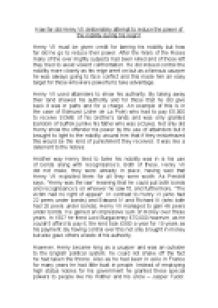 How far did Henry VII deliberately attempt to reduce the power of the nobility during his reign?

﻿How far did Henry VII deliberately attempt to reduce the power of the nobility during his reign? Henry VII must be given credit for taming his nobility but how far did he go to reduce their power. After the Wars of the Roses many of the over mighty subjects had been killed and of those left they tried to avoid violent confrontation. He did indeed control the nobility more closely as his reign went on but as a famous usurper he was always going to face conflict and this made him an easy target for those who were powerful to take advantage. Henry VII used attainders to show his authority. By taking away their land showed his authority and for those that he did give back it was in parts and for a charge. An example of this is in the case of Edmund (John de La Pole) ...read more.

He gained an impressive sum of money over these years. In 1507 he fined Lord Burgavenny £70,000 however, as he couldn’t afford to pay it, the kind took £500 a year for 10 years as his payment. By having control over this not only brought in money but also gave others a taste of his authority. However, Henry became king as a usurper and was an outsider to the English political system; he could not shake off the fact he had taken the throne. Also as he had been in exile in France for many years he had little trust in people. Instead of employing high status nobles for his government he granted these special powers to people like his mother and his uncle – Jasper Tudor. Although this may have seemed like a good way to diminish power from the nobility, in reality it just formed a bigger gap between him and his nobles. ...read more.

As Henry started to spend most of his time in his Privy Chamber the nobility had little access to him and because of this they had to react to events rather than shaping them. They had to take control in order to keep things running smoothly! In conclusion, Henry VII did somewhat managed to reduce the power of his nobility. Not only did he used attainders effectively in order to gain land/money as well as authority but he also cleverly used bonds and recognisance?s, which led him to gain a good amount of people on his peerage. Through these acts he showed that HE was the king. However, he was frequently away from his court and put a lot of extra work onto others. It was left a lot of the time for the nobility to pick up the pieces. Overall, he did do a lot to reduce the power of the nobility but his distrust in them made it difficult for his to get a result. ...read more.