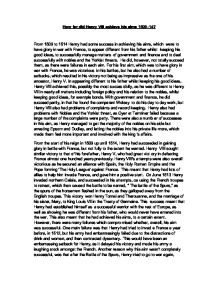 How far did Henry VIII achieve his aims 1509-14? From 1509 to 1514 Henry had some success in achieving his aims, which were to have glory in war with France, to appear different from his father whilst keeping his good ideas, to successfully manage matters of government and finance and to deal successfully with nobles and the Yorkist threats. He did, however, not totally succeed them, as there were failures in each aim. For his first aim, which was to have glory in war with France, he was victorious in his battles, but he also had a number of setbacks, which resulted in his victory not being as impressive as the one of his ancestor, Henry V. In appearing different to his father whilst keeping his good ideas, Henry VIII achieved this, possibly the most successfully, as he was different to Henry VII in nearly all matters including foreign policy and his relation to the nobles, whilst keeping good ideas, for example bonds. With government and finance, he did succeed partly, in that he found the competent Wolsey to do his day to day work, but Henry VIII also had problems of complaints and record keeping. Henry also had problems with Nobles and the Yorkist threat, as Oyer et Terminer failed because a large number of the complaints were petty. There were also a number of successes in this aim, as Henry managed to get the majority of the nobles on his side but arresting Epsom and Dudley, and letting the nobles into his private life more, which made them feel more important and involved with the king's affairs. ...read more.

Henry also made sure that anyone administering crown lands were now subject to the normal processes of the exchequer, and chamber finance was put on statutory footing, but it was allowed to continue its work more or less as before. So, in these two issues Henry may have officially changed the law, but it did very little to change the previous methods of dealing with government and finance. There were also many complaints that the receivers of crown lands paid their dues into the chamber and were therefore bypassing the financial and legal procedures of the exchequer. Therefore, although Henry went some way to achieving his aims in government and finance buy using Wolsey to deal with the day to day work, whilst making sure his policies were implemented, Henry failed on many aspects because he received many complaints, and although he changed the laws slightly, the proceedings carried on more or less as they had previously done. Henry VIII didn't have to face the same problems as his father when it came to dealing with the Yorkist threat, as his throne was far more established, but any opposition Henry faced he dealt with successfully, and he also, overall dealt successfully with the nobles. Before Henry VIII came to throne he had spent a fair amount of his time, practising a safe version of jousting, as real jousting was deemed too dangerous for him to take part in. ...read more.

Henry VIII's approach was to try and undo a lot of his father's damage by destroying the Council Learned and Executing Epsom and Dudley. He also appeared different to his father by managing to cancel only a few of his father's bonds, so publicly appearing different, whilst actually keeping most of them. However, there were areas where, arguably, Henry VIII was the same as his father. In dealing with the Yorkist threat, the execution of the Duke of Suffolk could be just the next step his father would have taken, had he lived longer. Also, in dealing with finances, he still kept a lot of his father's policies. Therefore, on the whole Henry VIII was different to his father, because of his foreign policy, the ways he dealt with the nobles and the fact he didn't want to do the day to day jobs of finance. In conclusion Henry VIII was, overall, mostly successful in achieving his aims, as he dealt with the nobles successfully, which helped him appear different to his father, as did his victory with France. Henry also managed to avoid dealing with day to day finances, which again made him different to his father, whilst keeping his father's good financial policies. There were, however, a number of failures which made in at incomplete success, such as not having a victory equal to Henry V in the French battle, and receiving a number of complaints about finances. ...read more.