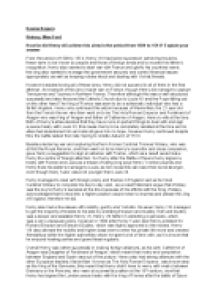 How far did Henry viii achieve his aims in the period from 1509 to 1514? Explain your answer

﻿Reema Begum History, Miss Ford How far did Henry viii achieve his aims in the period from 1509 to 1514? Explain your answer From the period of 1509 to 1514, Henry VIII had some success in achieving his aims, these were: to be known by people and those of foreign lands and to exceed his father?s recognition, Henry also wanted to start war with France and glorify his countries name, the king also wanted to manage the government securely and control financial issues appropriately as well as keeping nobles intact and dealing with Yorkist threats. However besides having all of these aims, Henry did not succeed in all of them in the first attempt. An example of this is to invade war on France, though Henry did manage to capture Terrouenne and Tournay in Northern France. ...read more.

Besides declaring war and capturing Northern France Cardinal Thomas Wolsey, who was at first the Royal Almoner, and then went on to be Henry?s councillor and close companion, gave Henry a suggestion to sign an alliance with France, which as a result would make Henry the centre of foreign attention. So Henry after the Battle of Spurs Henry signed a treaty with France and Louis as a tribute of being king pays Henry 1 million pounds and Henry fixes his sister?s marriage to Louis, as he knows this will make their bond stronger, even though Mary Tudor was a lot younger than Louis XII. Henry managed to deal with foreign policy and finance in England well as he hired Cardinal Wolsey to complete his day to day work, as a result historians argue that Wolsey was the key to Henry?s success at the time because of ...read more.

Overall Henry was rather successful in making foreign alliances, as his wife, Catherine of Aragon was Daughter of Ferdinand of Aragon, which meant that rivalry and completion between England and Spain was out of the picture. Henry also had strong alliances with the other European leaders; Maximillian I known as The Holy Roman Emperor, was known also as the King of the Germans, this meant that Henry didn?t have to worry with rivalry between Germany or the Romans, who were at a powerful position at the 16th century, now that Henry had signed the London peace treaty with the king of France after the battle of Spurs in Callais, where Henry managed to capture some English nobles. Henry even had France on his side, which shows that Henry was largely successful in gaining international fame and recognition. This was not only for his boisterous and talented personality, but because of his courage and power. ...read more.