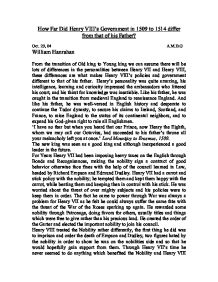 How Far Did Henry VIII's Government in 1509 to 1514 differ from that of his Father? Oct. 29, 04 A.M.D.G William Hanrahan From the transition of Old king to Young king we can assume there will be lots of differences in the personalities between Henry VII and Henry VIII, these differences are what makes Henry VIII's policies and government different to that of his father. Henry's personality was quite amazing, his intelligence, learning and curiosity impressed the ambassadors who littered his court, and his thirst for knowledge was insatiable. Like his father, he was caught in the transition from medieval England to renaissance England. And like his father, he was well-versed in English history and desperate to continue the Tudor dynasty, to secure his claims to Ireland, Scotland, and France, to raise England to the status of its continental neighbors, and to expand his God-given right to rule all Englishmen. 'I have no fear but when you heard that our Prince, now Henry the Eighth, whom we may call our Octavius, had succeeded to his father's throne all your melancholy left you at once.' Lord Mountjoy to Erasmus, 1509. The new king was seen as a good king and although inexperienced a good leader in the future. For Years Henry VII had been imposing heavy taxes on the English through Bonds and Recognisances, making the nobility sign a contract of good behavior otherwise face fines with the help of the council learned in Law, headed by Richard Empson and Edmund Dudley. ...read more.

of ruling the country, it was only after his brother Arthur's early death, that Henry was to become king, therefore he was very inexperienced and having experienced councilors was important. Henrys Government regarding his councilors differed very little from that of his Father. Although on the surface the council looked much alike during both Kings, I'm sure Henry VII would have listened to his councilors more than his son, who at the time he became king, wanted to do things completely different to his father for example war, and although Henry VIII's advisors told him not to go to war, he eventually did. Therefore there were some differences in the way the council was used. Henry VII signed the treaty of Medina del campo in 1489 which stated that peace between England and Spain, but more importantly a marriage uniting Henry VII's Son, Arthur with Catherine of Aragon. From this we can see Henry VII saw Spain as a county which you want on your side, rather than as an enemy. However when Arthur died young, Henry VII hesitated in the betrothal of his son to Catherine, even though this could have risked relations between England and Spain, he waited to see if any better proposals came along. In June 1509 the 17 year old Henry VIII marries Catherine of Aragon, during the period of his fathers mourning. Henry VIII was different from his father regarding Spain, as he got married to Catherine, while Henry VII never pushed for that marriage to take place. ...read more.

The two kings had a different policy towards France, The old king doing his best to avoid war while the young king doing exactly the opposite. However they both were alike in the fact that they both ended up engaging in contact with the French and Henry VIII did eventually sign a peace treaty with France. Henry VIII began and ended his reign with a series of ruinous military campaigns in France and Scotland. The court was infused by martial and chivalric values which were one of principal's mainsprings of aristocracy. It is hard to compare the different policies of the two kings regarding their treatment of France. Henry VIII did go to war with Scotland, but this war was started by the Scottish while Henry VIII was away fighting France. I think in the same circumstances although Henry VII didn't like war he would have acted the same, rather than accepting an attack from Scotland he would also have fought back. However Henry VIII didn't make any effort for peace an avenue which Henry VII probably would have tried first. I would say they both acted the same way regarding Scotland although like nearly other difference between the two kings, it has come from Henry VIII's haste. Lord Elton said Henry VIII was 'Exceptionally Impetuous' and most of the different decisions in government between Henry and his Father would have come from this attitude of Henry VIII's. I think both kings had very different style of doing things but their policies weren't as different as I first thought they would be. ...read more.