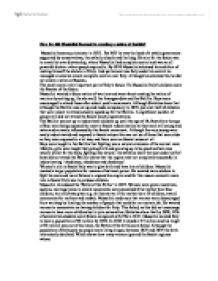 How far did Mussolini Succeed In creating a nation of fascists

How far did Mussolini Succeed In creating a nation of fascists? Mussolini became priminister in 1922. By 1925 he was the head of a stable government supported by conservatives, the catholic church and the king, His aim for the future was to create his own dictatorship, where Mussolini had complete control and was an all powerful dictator whom people aspired to. By 1926 Mussolini achieved his ambition of making himself the dictator of Italy. And parliament was fully under his control he managed to achieve almost complete control over Italy. Although he achieved this he did not create a nation of fascists. The youth were a very important part of Italy's future. To Mussolini Italy's children were the fascists of the future. Mussolini wanted a future nation of warriors and went about creating his nation of warriors by setting up, the she wolf, the Avanguardista and the Balillia. Boys were encouraged to attend these after school youth movements. Although Statistics show that although the Balillia was set up and made compulsory in 1935, just over half of children that were meant to attend actually signed up for the Balillia. ...read more.

He wanted women to concentrate on having children for Italy. This failed, as this did not encourage women to have more children but to join universities. Statistics show that by 1938, 15% of universities students were female compared with 6% in 1914. Mussolini wanted Italy to have a population of 60 million by 1950. In 1920 it stayed at 37 million and his target of 50 million was out of his reach, the Battle of the births soon failed. Although the population of Italy grew as people were living longer, between 1927 and 1934 the birth rate actually declined. Which shows how many women ignored the fascist regimes values. Mussolini did not so much create a nation of people whom believed and conformed to fascist roles and beliefs, but a deprived nation whom liked the idea of all the luxuries that were introduced. Mussolini set up the Italian workers' organisaton in which organized trips and outings for people whom could not normally afford to do this things in their normal lifestyle. ...read more.

To conclude although Mussolini was successful in creating a dictatorship, he did not make Italy's nation fascist overall. So his attempt failed. Although Mussolini had a lack of opposition to the regime, this was not because there was no opposition, but because people merely tolerated the regime rather than actually being true followers of fascist values. Although the youth were indoctrinated at school from a young age, the fascist values that were enforced at school were not continually enforced later on in lives, so many drifted from the regime and were not strong supporters. There was not enough done to impose these values upon children and they left it too late in order for it to have a proper impact. Many organistaions set up were purely popular because of the activities that were set up within these organizations, i.e. the OND, which provided luxuries for the working class. Many people were afraid through terror and propaganda of what might happen to them if they did not obey the fascist regime and so they joined the fascist party merely because of the consequences of what might happen to them. ...read more.