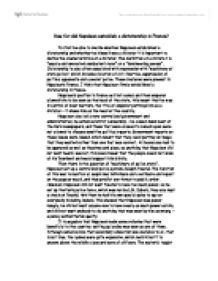 How far did Napoleon establish a dictatorship in France?

How far did Napoleon establish a dictatorship in France? To first be able to decide whether Napoleon established a dictatorship and whether he himself was a dictator it is important to define the characteristics of a dictator. The definition of a dictator is "usually and unelected omnipotent ruler" or a "domineering person". Dictatorship is also often associated with repression with "machinery of state police"; which includes violation of civil liberties, suppression of political opponents and a secret police. These features were present in Napoleon's France, I think that Napoleon firmly established a dictatorship in France. Napoleon's position in France as first consul and then emperor allowed him to be seen as the head of the state, this meant that he was in control of most matters, the title of emperor portrays him as a dictator - it shows him as the head of the country. Napoleon also led a very centralized government and administration, he enforced strict censorship - he closed down most of the Paris newspapers, and those that were allowed to remain open were not allowed to discuss sensitive political reports. ...read more.

Napoleon set up the schools to spread his ideas, proving him as controlling, a characteristic of a good dictatorial leader. It is also claimed that all reforms were put through a plebiscite to decided whether they would be put into action, however, the plebiscites were rigged to show great popularity for the reforms when it was not the case. Also, the judges were supposed to be elected by the general public, but they were in reality picked by Napoleon himself. Napoleon wanted to be in charge of, and control everything. Also, the local prefects (intendants) were to be elected by the general public, however this was not actually the case as Napoleon had lists of people that could be elected, this meant that nobody that he didn't believe would portray his ideas was not on the list, hence could not be elected. This was also the case with 'the Council of State', 'the Senate', 'the Tribunate', and 'the Legislative Body' - all the people elected were in reality chosen by Napoleon, and then put through rigged plebiscites. ...read more.

He wanted to be everywhere, he wanted to be God. The only reforms that Napoleon made that were not directly beneficial to him were the tax reforms (although there was an increase in indirect tax - the greater burden of which fell on the poor rather than the rich) and the abolishment of feudalism, but that too was done to gain more popularity, and if it had not been done the peasants would not have let him remain in power. Not only did Napoleon betray the revolution, he became a totalitarian and turned France into 'his' empire. He never did anything, which would not help him gain more power, or suppress any danger of him being overthrown. In some ways he was worse than Louis, in the way that Louis had bodies that restricted his power, such as the parlements, but Napoleon was the ruler of all the bodies. And if they spoke out against him he could dismiss them. He contained all political opposition to his regime and made sure that he was the leader of the country that nobody spoke out against. I firmly believe that napoleon established a strict dictatorship in France, and himself was the dictator of that regime. ...read more.