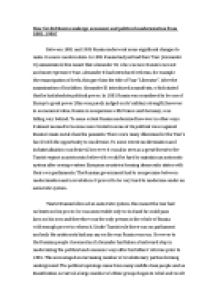 How far did Russia undergo economic and political modernization from 1881-1905?

﻿How far did Russia undergo economic and political modernization from 1881-1905? Between 1881 and 1905 Russia underwent some significant changes to make it a more modern state. In 1881 Russia had just had their Tsar (Alexander II) assassinated, this meant that Alexander III, who was now Russia?s newest and most repressive Tsar. Alexander II had introduced reforms, for example the emancipation of Serfs, this gave him the title of Tsar ?Liberator?. After the assassination of his father, Alexander III introduced a manifesto, which stated that he had absolute political power. In 1881 Russia was considered to be one of Europe?s great power (this was purely judged on its? military strength) however in economical value, Russia in comparison with France and Germany, was falling very behind. To some extent Russia modernized however in other ways it almost seemed to become more brutal in some of its political views against Russia?s main social class the peasants. There ware many dilemmas for the Tsar?s faced with the opportunity to modernise. To some extent modernisation and industrialization was desired, however it was also seen as a great threat to the Tsarist regime as aristocrats believed it would be hard to maintain an autocratic system after seeing western European countries forming democratic states with their own parliaments. The Russian government had to compromise between modernisation and a revolution. It proved to be very hard to modernise under an autocratic system. Tsarist Russia followed an autocratic system, this meant the tsar had no limits on his power, he was answerable only to God and he could pass laws on his own and therefore was the only person in the whole of Russia with enough power to reform it. ...read more.

These people believed that the only way to keep them in check would be through strong discipline. This discipline was normally handed down from the superiors to the lower ranks, which often took time, this was another example of the Russian empires? inefficiency. The peasants often had uprisings and revolts in order to make the Tsarist regime unstable during time of poor harvest. This was because with the likelihood of them starving to death was rather high and therefore they saw it as having nothing to lose. The Russian economy benefited from Witte?s ?Great Spurt? from 1892 to 1903. The new finance minister Sergei Witte wished to create a ?spiral of upward industrial growth?. He planned on doing this by improving the railway system which would improve communications between major cities as well as increasing the demand for steel, iron and coal to help complete the railway construction. While Witte was in office the length of the railway doubled in kilometers. This shows that some aspects of the Russian economy were slowly improving. Prior to Witte, finance ministers Bunge and Vyshnegradsky both attempted to modernise Russia but using very cautious methods. Witte was the first finance minister to create any significant economic reforms. He managed to do this using the ?Witte system?. This system depended on foreign investment, from Belgium, Britain and most importantly France (82% of investments). Witte also encouraged people to listen to foreign expertise especially Western Europe engineers. These experts told them to focus on ?capital goods? such as coal, iron, steel and machinery. ...read more.

They also had differing views on the size of the party- Lenin wanted the party to be exclusive to educated revolutionaries and the decisions would be carried out by the elite, where as Martov was very open to a democratic discussion. The huge difference in opinions even within a party shows just how underground the political opposition was spreading and increasing in ideas. In conclusion, by 1905 Russia had reached a point in between feudalism and capitalism. This was because the middle class was growing significantly after the 1890?s great spurt and so the Tsar was having to give up some of its power. The aim of the middle class was to take power completely from the Tsar and the elite government, however that hadn?t happened by the end of 1905, it was merely on its way. However for the peasants between 1881 and 1905 they were still treated in the same way, and although they may have got a job during Witte?s great spurt they will most likely have lost it again by 1902 due to the recession, or they may have given up and left the cities due to the appalling wages and living conditions that they had to endure. Witte?s system did to some extent help modernise Russia but there were many drawbacks, which made it inefficient. After the worldwide recession Russia found It hard to get foreign loans and imports and exports as every other country in the world was worried about their own economy and was doing anything in their power to look out for themselves. ...read more.