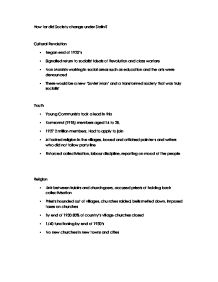 How far did Society change under Stalin

How far did Society change under Stalin? Cultural Revolution � Began end of 1920's � Signalled return to socialist ideals of Revolution and class warfare � Non Marxists working in social areas such as education and the arts were denounced � There would be a new 'Soviet Man' and a transformed society that was truly socialist Youth � Young Communists took a lead in this � Komsomol (1918) members aged 14 to 28. � 1927 2 million members. Had to apply to join � Attacked religion in the villages, booed and criticised painters and writers who did not follow party line � Enforced collectivisation, labour discipline, reporting on mood of the people Religion � Link between kulaks and churchgoers, accused priests of holding back collectivisation � Priests hounded ...read more.

Delivering leaflets, gathering firewood etc � Schools should be linked to factories � Non party teachers driven out and replaced by red specialists � Party members were sent to college to study for technical and political degrees. � Some factory managers found they had ill disciplined and poorly educated workers who could only do one job as result of this Education � 1931 Stalin was outraged by state of schools, Komsomol and Shulgin had done great deal of harm to system. � Stalin needed educated workers � Central Committee ordered change of policy � Physics, chemistry and maths had to be taught and taught well. � Exams, homework textbooks and rote learning re appeared � Discipline brought back, by end of 1930's uniforms were brought back � History had ...read more.

Women and Family � Abortion and divorce was easier under the Bolsheviks so family unit weakened by the time Stalin in power � 'quicksand society' created by rapid industrialisation � Falling birth rate, juvenile crime, homeless children � The Great Retreat developed in 1930's � Family Code 1936 made abortion illegal except certain circumstances, harder to get divorced, child support payments and mothers with 6 children had bonus payments each year, increased up to 11 children. � Prostitution and homosexuality illegal � Birth rate rose from 25 per 1000 1933 to 31 per 1000 1940 � Marriage/divorce rate did not alter much � Many families had been deserted by the fathers � April 1935 decree allowed violent crimes committed by the over 12's punishable as an adult � NKVD cleared homeless children from towns and cities � Parents could be fined for their children's hooliganism ...read more.