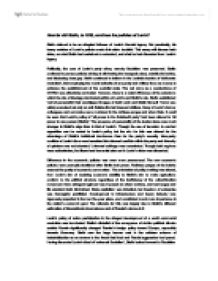 How far did Stalin continue Lenin's policies to 1939?

How far did Stalin, to 1939, continue the policies of Lenin? Stalin claimed to be an allegiant follower of Lenin's Marxist legacy. But practically, his heavy revision of Lenin's policies made this claim doubtful. This essay will discuss both sides, on what Stalin had enshrined or extended, and what he had discarded from Lenin's legacy. Politically, the core of Lenin's party ethos, namely Socialism was preserved. Stalin continued to pursue policies aiming at eliminating the bourgeois class, notably the kulaks, and disclosing class gap. Stalin continued to believe in the Leninist doctrine of 'deliberate revolution', that employing the moral authority of one party and military force as means to enhance the establishment of the socialist state. The red army as a counterforce of CHEKA was effectively combated. ...read more.

Universal suffrage was nonexistent. Though both regimes were authoritarian, the liberal and humanist element in Lenin's vision was discarded. Difference in the economic policies was even more pronounced. The new economic policies were promptly abolished after Stalin took power. Ruthless purges of the kulaks ensured the purity of economic communism. The orientation of policy making was altered, from Lenin's aim of restoring economic stability to Stalin's aim to make agriculture conform to the political structure regardless of the inefficiency of the collectivization movement. More stringent regiment was imposed on urban workers, and real wages and life standard both diminished. State capitalism was inherited, but freedom of enterprise was thoroughly prohibited. Development in infrastructure and heavy industry was vigorously propelled in the two five-year plans, and constituted much more importance in the nation's economic goal. ...read more.

This skepticism, which was proved to be correct, went beyond Lenin's scope. Stalin's proclamation as the heir of Lenin was no more than propaganda used to legitimize his position at the beginning of his reign. In fact, Stalin's policies were all made from a realpolitician's perspective that was completely contrary to Lenin's. He employed Socialist ideology as an instrument to implement his unchallengeable rule instead of an ideal to strive for. The na�vet� and incompleteness of Lenin's theory also left room for his revision and rewriting of history. Stalin continued only the part of Lenin's policies that were not incompatible with his own ambition, and only highlighted this point to offer a justification for his own policies. His allegiance lied ultimately to himself. Stalin was not, at any point, a true successor of Lenin. ?? ?? ?? ?? ...read more.