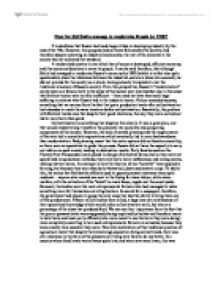 How far did Stalin manage to modernize Russia by 1938?

How far did Stalin manage to modernize Russia by 1938? It is doubtless that Russia had made huge strides in developing industry by the end of the '30s. However, this progress had not been followed by the society, and therefore despite achieving an industrialized society, the rest of the elements in the society had not achieved that standard. A modernized country is one which has of course a developed, efficient economy, and this economy functions to serve its people. It can be said therefore, that although Stalin had managed to modernize Russia's economy by 1938 (which is in fact also quite questionable when the imbalance between the industrial sectors is taken into account), he did not provide for the society as a whole, having actually trampled all over the traditional structure of Russian society. From this perspective, Russia's "modernization" can be seen as a failure, both in the sense of the human cost involved but also in the sense that Stalinist tactics were terribly inefficient - there need not have been such huge suffering to achieve what Russia had in the industrial sector. Failure exceeded success, something that we can see from the fact that grain production levels after collectivization took decades to reach the same levels as before collectivization. Essentially, the problem with Stalinist tactics was that despite their good intentions, the way they were carried out led to more harm than good. Collectivisation is something that displays this clearly. ...read more.

The successes could be offered to prove that they did succeed, but the fact that the population was so suppressed and its needs brushed aside go to show exactly that they failed. The result of this loose central planning was that there was a great deal of wastage. Whereas some industries were lagging due to the shortage of materials, others were overproducing and their products went to waste. To add to this, the tremendous pressure from above to fulfill the (unrealistic) quotas meant that production was often of low quality, which goes to show further shortage. It is situations such as these that make us see how unnecessary the cost of the Stalinist modernization era was. As with collectivization, terror was not absent during the Five Year Plans either. The equivalent of the kulak for the cities was the "bourgeois experts", who were basically factory managers from before the revolution and had the necessary expertise to run the factories. As was common Bolshevik practice, all problems, instead of being solved, were piled onto these "counter-revolutionaries" and they in turned were eradicated. This was destructive on its own, but its implications reached much further as well. Managers, in fear of their lives, would hijack trains destined for other factories to complete their own quotas, and would also fudge the figures to present a positive result to the government. The government was driving a sector of the economy that was already quite modern - in the sense of organization - backwards. ...read more.

To add to this, all was not well and rosy at the workplace. Workers were constantly in fear of their lives - one slip, one mistake, a day sick, and you were a counter-revolutionary to be sent to the Gulag to be a state slave, or shot on the spot. Wage differentials were introduced, and better trained workers received better housing, more food, cinema tickets and other such priviledges. Of course, this acted as instigation to work hard, but when socialism is your ideology, you don't ignore the majority of the population that doesn't know someone on the inside to say a good word or two. Needless to say, the Great Socialist State did not achieve to provide for the Great Proletariat. The successes of the Stalinist modernization were not enough to justify the appalling human cost they brought on. It did not create an emerging super-efficient state, with the perfect economy to say that they needed the rigor of terror to achieve this. In many cases we see that actually the tactics used pushed Russia backwards, into irretrievable losses, and for this reason it is only fair to conclude that although Stalin's tactics were genius in theory, he did not take into account the people they were about, and his excessive megalomania did more to take Russia back than forward. Ironically, collectivisation and the Five Year Plans were more so "two steps back, one step forward" than the NEP had been. ...read more.