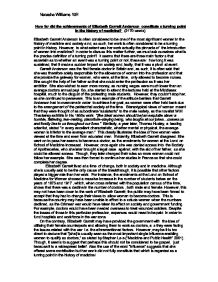 How far did the achievements of Elizabeth Garrett Anderson constitute a turning point in the history of medicine?

How far did the achievements of Elizabeth Garrett Anderson constitute a turning point in the history of medicine? (2170 words) Elizabeth Garrett Anderson is often considered to be one of the most significant women in the history of medicine and society and, as such, her work is often considered to be a turning point in history. However, to what extent was her work actually the pinnacle of the introduction of women into medicine? In order to discuss this matter further, we must ask ourselves what is the precise definition of a turning point? It seems that there are three main factors that ascertain as to whether an event was a turning point or not, these are: how long it was sustained, that it made a sudden impact on society and, lastly, that it was a pivotal event. Garrett Anderson was the first female doctor in Britain and, as such, it is often said that she was therefore solely responsible for the allowance of women into the profession and that she provide the gateway for women, who were, at the time, only allowed to become nurses. She sought the help of her father so that she could enter the profession as it was her ambition. ...read more.

This may have embarrassed other MPs, as he is obviously convinced by the events and changing views and, as a male in the hierarchy of society, his word would probably have been held in some regard. Despite this, it may not have been the influence of the British women that persuaded such people; external pressures may also have caused attitudes to change. Elizabeth Blackwell was the first female to qualify as a doctor in the USA. However, she qualified in 1849, which was quite some time before Elizabeth Garrett achieved her goal! The USA might possibly have been who Arthur Roebuck was referring to as the accuser that would impose the "stain" on the House of Commons, though this could just have equally been in reference to the women of Britain. Many other areas of society were being developed at the time of Elizabeth Garrett's quest for success that perhaps the government felt it necessary to review and develop their attitudes and policies, as they were in, yet again, a male only profession. Therefore, Garrett Anderson's work may not even have influenced governmental policies hugely, but may instead have acted as a catalyst towards the changing of views and eventually passing an Act, opening all medical qualifications to women. ...read more.

On the other hand however, this may be misleading, as other results from the same survey revealed that "45% of women were said to give up the job within 5 years, compared with only 10% of men". Therefore, it seems that women are given the equality they deserve but are less likely to follow it through for more than five years, so perhaps Elizabeth Garrett did manage to accomplish a sustained achievement. In conclusion, I feel that, although Elizabeth Garrett Anderson's work is a sustained achievement that is still relevant to today, she was not responsible for the constitution of a turning point in the history of medicine. She helped to bring about the idea of the introduction of women in to a doctoral profession, though she was not solely responsible as there were many attributing factors that brought about this major change. Additionally, I feel that she achieved more for herself than society, not in that she was selfish but in that she acted on what she felt was right for her, though she was able to influence and spur on others to take action. However, I think it's relevant to add that attitudes were adjusting and changing at this time so, without her, women would have been accepted as equals by society and these changes would have followed in due course. ?? ?? ?? ?? Natasha Williams 10E ...read more.