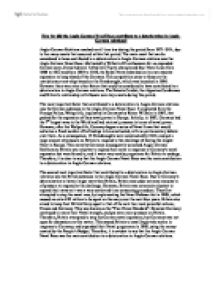 How far did the Anglo German Naval Race contribute to a deterioration in Anglo-German relations?

Therefore, it is evident to say that the Anglo German Naval Race was the main contribution to a deterioration in Anglo-German relations. However, there were also other factors, apart from the Anglo German Naval Race, that contributed to a deterioration in Anglo-German relations. The most important factor was the Entente Cordiale. The Entente cordiale was a series of agreements signed on the 8th April 1904 between Britain and France. Agreements such as Britain had to stay out of Egypt and France was allowed freedom in Morocco produced a closer relationship between Britain and France. However, Germany viewed the Entente Cordiale as a deliberate attack against German development and was particularly antagonised by this decision since it had been made without her consent or consultation. Britain, however, argued that the Entente with France was not made to deliberately antagonise Germany but that there were more predominant motives. Britain claimed that the alliance was to settle disputes between them and France and ultimately reduce the threat of war breaking out in Europe. It can therefore be seen that the Entente Cordiale was not a deliberate direct attack against Germany, although, despite these ulterior motives, Germany still opposed the Entente and in protest, initiated the first Moroccan Crisis in 1905 which further worsened Anglo-German relations whiles strengthening the Anglo-French Entente. ...read more.