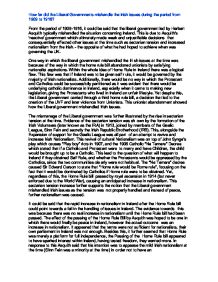 How far did the Liberal government mishandle the Irish question?

From the period of 1909-1916, it could be said that the liberal government led by Herbert Asquith typically mishandled the situation concerning Ireland. This is due to Asquith's 'reactive' government which ultimately made weak and unjustifiable decisions that consequentially effected other issues at the time such as sectarian tension and increased nationalism from the Irish.- the opposite of what he had hoped to achieve when was governing the UK. One way in which the liberal government mishandled the Irish issues at the time was because of the way in which the home rule bill abandoned unionists by satisfying nationalist aspirations. Within the whole idea of Home Rule in Ireland there was a logical flaw. This flaw was that if Ireland was to be given self rule, it would be governed by the majority of Irish nationalists. Additionally, there would be no way in which the Protestant and Catholics could be successfully partitioned as it was evident that there would be underlying catholic dominance in Ireland, especially when it came to making new legislation, giving the Protestants who lived in Ireland an unfair lifestyle. Yet despite this, the Liberal government carried through a third home rule bill, a decision that led to the creation of the UVF and later violence from Unionists. This unionist abandonment showed how the Liberal government mishandled Irish issues. ...read more.

One fundamental reason why the Liberal Governments failed to appropriately handle the Irish Issues from 1909-1916 was because of the prime minister Herbert Asquith. Asquith's constant indecisiveness made his seem untrustworthy and manipulative. This devious side to him was shown particularly when the Amendment to the Home Rule Bill was made in 1913, this amendment gave the option of the counties in the Ulster region to opt out. Asquith never previously mentioned any partition when he introduced the Home Rule Bill and introduced this amendment in secret. Another example of Asquith's sudden change of tone was the fact that there was no mention of a Home Rule Bill when he came into power in 1906, but there was in 1911. These changes in perspectives from Asquith made him seem mendacious and made him look weak also. Asquith was shown to be a prime minister who was reactive to situations that happened around him. This was not ideal since Asquith was meant to give an impression that his Liberal Government was setting the agenda on a daily basis, not just reacting to what happens on the agenda, a crucial quality for a War time prime minister. This Inadequacy from Asquith gives the impression that the Liberal governments at the time mishandled the Irish Issues. ...read more.