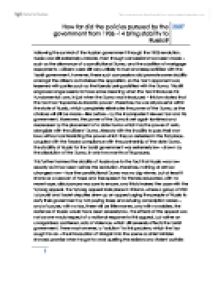 How far did the policies pursued by the government from 1906 -14 bring stability to Russia?

Following the survival of the Russian government through the 1905 revolution, Russia was still extremely unstable. Even though concessions had been made - such as the allowance of a constitutional Duma, and the abolition of mortgage repayments - citizens were still very unlikely to trust and keep satisfied with the Tsarist government, however, these such concessions did promote some stability amongst the citizens as it divided the opposition, so the Tsar's opponent was lessened with parties such as the liberals being satisfied with the Duma. This still engraved anger seems to have some meaning when the Tsar introduces his Fundamental Laws, in just when the Duma was introduced - this law stated that the Tsar had 'Supreme Autocratic power', therefore, he was all powerful within the state of Russia, which completely eliminates the power of the Duma, as the choices will still be made - like before - by the incompetent viewed Tsar and his government. Moreover, the power of the Duma is yet again tarnished and decreased by the placement of a state Duma which has the power of veto, alongside with the citizens' Duma. ...read more.

orders - and of course, with no tax, there will be little money, and with no soldiers, the defence of Russia would have been severely low. The effects of the appeal was not as one would expect of a national response to this appeal, but rather an unorganised, scattered, acts of violence, which still severely affects the Tsarist government. There was however, a "solution" to this problem, which the Tsar sought to do - the introduction of Stolypin into the scene as chief minister showed promise when he got to work quelling the resistors and violent activists by arresting and executions by the introduction of Marital Law - giving the courts more power - the huge amount of over 2,500 executions from the years of 1906 to 19011, earned him the phrase "Stolypin's necktie". His severe policy of repression upon the citizens did induce some stability upon Russia, however, from his assassination and increased disturbances in 1911, it is clear that some people thought otherwise than him. ...read more.

The Tsar had however learned from his past mistakes, and by this, it means he allowed Stolypin to introduce new electoral laws which limited the vote to the propertied classes. The procedure of the voting took was set as only 1 in 6 of the male population could vote - the peasants and industrial workers were virtually excluded; which meant that the new and third Duma was made up of mainly right wing candidates, which also meant that they were completely for the Tsar and the Tsarist government, which meant once again the citizens were ignored, and the Tsar could pass any laws easily, swiftly, and with no opposition. This repetition of the phase which already angered the citizens so is pretty stupid of the Tsar, and with more anger dwelling amongst the citizens, it was not long until the Stolypin's assassination in 1911 occurred, and further incompetence further inflicted more instability within Russia. ?? ?? ?? ?? How far did the policies pursued by the government from 1906 -14 bring stability to Russia? 2007 1 ...read more.