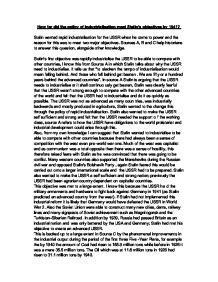 This is backed up to a large extent in Source C by the phenomenal improvements in the industrial output during the period of the first three Five-Year Plans, for example the by 1940 the amount of Coal had risen to 165.9 million tons while before in 1928 it was a mere 35.5 million tons. The Oil which was at 11.6 million tons in 1928 had risen to 31.1 million tons by 1940. Stalin's second objective was ideological in nature. He wanted to achieve industrialisation by driving out the class enemies of the USSR. I know this from Source B which tells us that "Stalin presented the industrialisation drive as a class war against alleged 'class enemies' such as kulaks, NEP-men, private businessmen, traders and other survivors from the old regime". This shows us that Stalin wanted to use the policy of industrialisation to drive out the class enemies and he planned to get the working proletariat on his side to drive them out. Source A also says "In 1928 Stalin declared, 'Our class enemies still exist. They are growing and trying to take action against the Soviet government.' ...read more.

I also know that this objective was met to a large extent because Stalin was able to introduce a somewhat authoritarian system in which he dictated the policies and procedures and directed and controlled all activities without any meaningful participation from his lesser assistants. Part of this authoritarian system was the introduction of Gosplan and state planning in which the state was able to decide what goals were to be achieved. To conclude, by 1941 the policy of industrialisation was able to meet most of Stalin's objectives. His objective of advancing the USSR to allow them to compete with other countries and allowing them to be strong and self sufficient was met to quite a large degree as the USSR could now be seen as an industrial nation by 1939 and could protect itself. Although his objective of driving out class enemies was met to a limited extent he managed to drive out many kulaks and potential saboteurs to his regime. His political objective; to gain absolute power was also met to a large extent as he had achieved complete power and was working towards an authoritarian system. ...read more.