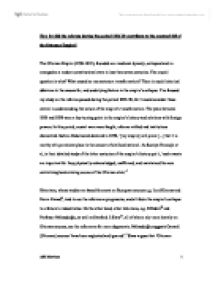 How far did the reforms during the period 1826-39 contribute to the eventual fall of the Ottoman Empire?

How far did the reforms during the period 1826-39 contribute to the eventual fall of the Ottoman Empire? The Ottoman Empire (1299-1924), founded as a medieval dynasty, collapsed and re-emerged as a modern constitutional state in less than seven centuries. The crucial question is why? What caused so momentous a transformation? There is much historical debate as to the causes for, and underlying factors in the empire's collapse. I've focused my study on the reforms passed during the period 1826-39, for I would consider these central in understanding the nature of the empire's transformation. The years between 1826 and 1839 were a key turning point in the empire's history and relations with foreign powers. In this period, crucial wars were fought, reforms ratified and institutions dismantled. Sultan Abdulmecid declared in 1839, '[my empire] will prove [...] that it is worthy of a prominent place in the concert of civilised nations'. As Suraiya Farooqhi et al, in their detailed study of the latter centuries of the empire's history put it, 'such events are important for they physically acknowledged, reaffirmed, and maintained the new centralizing/westernizing course of the Ottoman state.'i Historians, whose studies are based foremost on European sources e.g. Lord Kinross and Feroz Ahmadii, tend to see the reforms as progressive, and attribute the empire's collapse to a failure to industrialise. On the other hand, other historians, e.g. E.Eldemiii and Professor Maksudoglu, as well as Stanford J. Shawiv, all of whom rely more heavily on Ottoman sources, see the reforms as far more degenerate. Maksudoglu suggests Osmanli [Ottoman] sources 'have been neglected and ignored'.v Shaw argues that 'Ottoman history has been discussed... but always from the European perspective, through the light of European prejudice, and largely on the basis of European sources'.vi It is due to a neglect of Ottoman sources that many historians have misinterpreted the causes of the empire's collapse; there exists an unnatural bias towards the conventional European justification. ...read more.

The War of Independence exposed the weaknesses of the Sultan's reforms. As Mansel agrees, 'the Sultan's reforms did not help the Ottoman Empire in its' struggle against the Greek revolt'.xxxii The War of Greek Independence began 25 March 1821 and is certainly one of the central elements in bringing about the case for reform. The War of Greek Independence, though initially taking the form of a Greek cultural renaissance, was in fact an attempt by the Greeks to actively destabilize the Ottoman Empire; as Glenny suggests: 'the Greek rebellions of 1821 were not spontaneous reactions to deteriorating social and economic circumstances'.xxxiii By June 1827, after six years of war, the Ottoman's under the leadership of the commander Reshid Pasha, succeeded in subjugating continental Greece, this ought to have signalled the end of the war, instead occupation of mainland Greece prompted British, French, and Russian intervention; the Russians, in particular, put immense pressure on the Ottomans. Maksudoglu, strengthening the line of argument, argues that the Russians were guilty of inciting the Greeks to revolt'.xxxiv The Austrians under Metternich favoured the suppression of the rebellious Greeks. The British, encouraged by the ambassador Sir Stratford Canning, fought the Ottoman government. According to Mansel, in an effort to persuade the Ottoman government to recognise Greece, European ambassadors, who felt physically threatened in Constantinople, left for the island of Poros between December 1827 and June 1829.xxxv On 20 October 1827, the Ottoman fleet was completely obliterated at the Battle of Navarino. The support of British, French and Russian navies for the Greeks insurgents violated the 1827 Treaty of London in which the three great powers had committed themselves to securing an armistice between the Greeks and the Ottomans, 'without taking part in the hostilities between contending parities'.xxxvi The British, as suggested by Glenny, were 'egged on by the philhellenic sentiments of Sir Stratford Canning'.xxxvii Kinross agrees: 'the great powers, the rival expansionist empires of Austria-Hungary and Russia, intrigued from behind their adjoining frontiers, marking out spheres of influence, stirring ...read more.