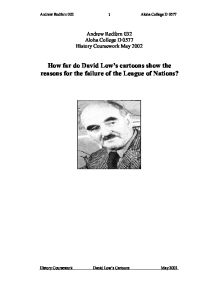 How far do David Low&amp;#146;s cartoons show the reasons for the failure of the League of Nations?

Andrew Redfern 032 Aloha College D 0577 History Coursework May 2002 How far do David Low's cartoons show the reasons for the failure of the League of Nations? David Low was born in New Zealand, of Scottish parents in 1891, he decided to become a cartoonist when he came across a pile of Punch Magazines and was impressed by the work of the cartoonists. By the age of 15 his cartoons were being published in New Zealand newspapers and magazines. By 18 he was working for the Sydney Bulletin in Australia and it was here that his work was recognised which resulted in him being offered a job at the London Star in 1919. It wasn't till 1927, eight years later that Lord Beaverbook, whom controlled one fifth of the London circulation, coaxed him to the Evening Standard to what was to be his most celebrated period. Low's cartoons were very critical of the British government, its policies and it leadership, but it was not only the British government he was critical of, Hitler, Mussolini, Stalin, the USA and the League of Nations all had to deal with themselves being portrayed in an amusing but ill light. His cartoons were often very controversial and contradictory to Britain's current policies but nothing could stop him showing them. And one reason, maybe, why he exposed it so effectively was because his cartoons were published in the newspapers most read in the innermost precincts of the English Establishment. The Evening Standard was at the time the house journal of the London West End. It was read in every club, every top hotel, every embassy and every government department. When Low joined the Evening Standard he was promised precise guarantees about presentation and Beaverbook very rarely interfered with the content of the cartoons, allowing Low to express his radical political ideas. Beaverbook was a supporter of the conservative party and agreed with the policy of appeasement so he did not always meet eye to eye with Low, but he knew that if he did not publish his cartoons others would. ...read more.

As the dialogue says, "don't you think after all it may be an idea to have an international police force?" and the second member replies, "tut tut, too risky, much cheaper and wiser to wait until we are all murdered in our beds" As we can see the USA is featured in this cartoon, but they are behind the members of the League and could be suggesting that even if they were a part of the League it may of not made a difference. In appendix number 3 Japan is walking over the League whilst a Lord Lytton, is applying a face saving kit to her. This is showing how permanent members of the League could get away with anything, and how they can just walk all over the League. These cartoons are fair criticisms of the members self interest because of their indecisiveness or lack of interest to take action against the clear aggressors, although it could be argued that Japan was too far away or any action taken on the Japanese would of needed the USA or USSR's support. This was the beginning of the failure of the League, back in Europe Mussolini and Hitler watched with interest. The League had tried to solve the problem of disarmament in the 1920's but with very limited success. There was not much pressure on the League to do anything in the 1920's about disarmament because the international climate was good and so was the economy. However, in the early 30's there was certainly more pressure for something to be done. Germany felt that it was time that countries disarmed to their level and also many countries were spending more on armaments than before World War One. The first major attempt at disarmament came in July 1932 when the Germans called for equality, but when this principle could not be agreed on the Germans walked out. ...read more.

If there was any hope of getting France to support sanctions they were now gone. France would now do anything to get Mussolini's support against Hitler, even if this meant giving away Abyssinia. The League had now been reduced to an empty sham and it was never to even be consulted again until 1946 when it was replaced by the United Nations. David Low said himself that "A cartoon tells more in a few lines than do ten thousand words" and I agree with him. In just eleven cartoons he has managed to depict the reasons for the failure of the League of Nations and its consequences. In his cartoons he has shown why the League failed because; America was absent from the League, economic sanctions did not work or were never enforced, decisions were slow and the main theme in his cartoons and the most important reason for the failure in my opinion, the self interest of its leading members. The reason why economic sanctions didn't work was because, mainly Britain and France, were too concerned with their own economies or what the consequences of angering an aggressor would do and he has also shown how the structure of the League helped in its downfall, in terms of how permanent members were virtually untouchable when it came to them breaking the convent. The title asks "How far do David Low's cartoons show the reasons for the failure of the League of Nations" the answer would be; very accurately. Word Count 2990 Bibliography 1. Years of Wrath, A cartoon history 1932 - 1945, David Low, London, Victor Gollancz Ltd, 1986 2. English History 1914 - 1945, AJP Taylor, Middlesex, Penguin Books, 1965 3. Modern World History, Ben Walsh, London, John Murray, 1996 4. Internet website, http://www.spartacus.schoolnet.co.uk, David Low autobiography. 5. European History 1848 - 1945, T A Morris, HarperCollins, London, 1995 6. Microsoft(r) Encarta(r) Encyclopedia 2000. (c) 1993-1999 Microsoft Corporation. 7. Internet website, http://library.ukc.ac.uk/cartoons/, University of Kent, The Centre for the Study of Cartoons and Caricature Appendices Appendices number 1 to 11 in the following booklet. ...read more.