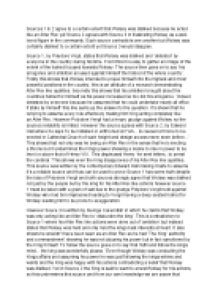 ﻿Sources 1 & 2 agree to a certain extent that Wolsey was disliked because he acted like an Alter Rex yet Source 2 agrees with Source 3 in illustrating Wolsey as a well-loved figure in the community. Each source contradicts one another but Wolsey was certainly disliked to a certain extent yet Source 3 would disagree. Source 1, by Polydore Virgil, states that Wolsey was disliked and ?detested? by everyone in the country during his time. From this it is easy to gather an image of the extent of the hatred focused towards Wolsey. The source then goes on to say ?his arrogance and ambition aroused against himself the hatred of the whole country?. Firstly this shows that Wolsey intended to propel himself into the highest and most powerful positions in the country, this is an attribute of a monarch demonstrating Alter Rex like qualities. Secondly this shows that his ambition brought about the countries hatred for himself as his power increased so too did his arrogance. ...read more.

strongly agree that Wolsey was disliked not just by the people but by the king for his Alter Rex like actions however source 1 must be taken with a grain of salt due to the grudge Polydore Vergil held against Wolsey who had him imprisoned leading to Vergil having a deep seated hatred for Wolsey leading him to be prone to exaggeration. However Souce 3 is written by George Cavendish in which he claims that Wolsey was only acting like an Alter Rex to ?disburden the king?. This is contradictory to Source 1 where his Alter Rex like actions were done out of ?ambition? but instead states that Wolsey was held and only held the kings best interests at heart. It also shows he wouldn?t have been seen as an Alter Rex as he had ?The King? authority and commandment? showing he was not abusing his power but in fact sanctioned by the King himself. To follow the source goes on to say that ?fulfil and follow the kings mind... ...read more.

Although Source 3 tells us that he wasn?t acting as an Alter Rex, caution must be taken when considering this as George Cavendish was Wolsey?s personal assistant in his later life and being under his employment for that long would lead him to see Wolsey in a positive light, plus he was only a personal assistant and was not privy to Wolsey?s political actions. Source 2 from Hall is quite reliable as he gathered people?s opinion and wrote about it but yet still shows displeasure aimed at Wolsey?s Alter Rex actions. Source 3 strongly disagrees with the statement as it supports that Wolsey?s actions were done with the intent to help the Kings workload and was well liked for this and had the king?s authority. On the other hand Source 2 mildly disagrees with the question as we see that the King wasn?t entirely happy with Wolsey?s actions. In conclusion although the sources dispute exactly who dislike Wolsey and the extent of the hatred is debated by the sources there is a general consensus that Wolsey was in fact disliked due to acting like an Alter Rex. ...read more.