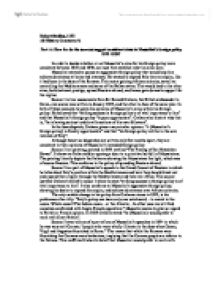 How far do the sources suggest consistent aims in Mussolini's foreign policy 1922-1939?

Robert Stables, 12F2 AS History Coursework Part A: How far do the sources suggest consistent aims in Mussolini's foreign policy 1922-1939? In order to decide whether or not Mussolini's aims for his foreign policy were consistent between 1922 and 1939, we must first establish what his aims were. Mussolini wanted to pursue an aggressive foreign policy that would help him achieve dominance at home and overseas. He wanted to expand Italy into an empire, like it had been in the days of the Romans. This meant gaining African colonies, aswell as controlling the Mediterranean and some of the Balkan states. This would lead to his other aims; build national prestige, spread Fascism abroad, and hence gain domestic support for his regime. Source 1 is two assessments from Sir Ronald Graham, the British ambassador to Rome, one source was written in January 1923, and the other in June of the same year. In both of these accounts he gives his opinions of Mussolini's aims within his foreign policy. ...read more.

This source justifies Graham's belief in souce 1 where he says "striking success in foreign policy is of vital importance to him". It also conforms to Mussolini's aggressive foreign policy, showing his desire to expand his empire, and achieve dominance over African colonies. The only notable change in his policy from Grahams views in 1923, is his preference of an Ally. "Italy's policy can have only one watchword - to march to the ocean. Which ocean? The Indian ocean...or the Atlantic...In either case we will find ourselves confronted with Anglo-French opposition." Mussolini seems to give no regard to British or French opinion. In 1923 Graham stated "he (Mussolini) would prefer to work with Great Britain". Source 5 even tells us of a part of one of Mussolini's speeches in 1934 in which he was very anti-German. "people who were wholly illiterate in the days when Caesar, Virgil and Augustus flourished in Rome." This means that whilst the Romans were flourishing the Germans were barbarians, implying that the German people are inferior to the Italians. ...read more.

He tells of how it was described as "the return of Italy to the eternal grandeur of Rome". It is a good source to understand Mussolini's reasons for invading Abyssinia. He wanted to expand his empire hence spread Fascism abroad and then in turn this would hopefully increase support for his regime and build up national prestige also. These six sources give a wide range of opinions about Mussolini's foreign policy, spread over the period of sixteen years. Generally the sources all conform to Mussolini's desire to pursue an aggressive foreign policy, by means of military strength in invading such places as Abyssinia. They all give the opinion that Mussolini was prepared to take his country to war in order to achieve his aims, yet there is one inconsistency in Mussolini's foreign policy. From 1923 to 1935, Mussolini gives no indication of aggression towards the British or French, and even openly calls the Germans barbarians. Whereas in 1935 he praises the Germans and in 1939, a year before declaring war on them, announces that he is prepared to show aggression towards them in order to break through the Mediterranean and expand into Africa ...read more.