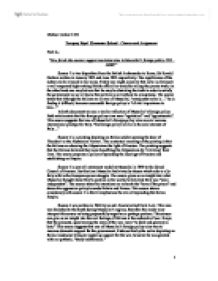 Michael Archer 12F2 Torquay Boys' Grammar School - Coursework Assignment Part A; "How far do the sources suggest consistent aims in Mussolini's foreign policy 1922-1939?" Source 1 is two dispatches from the British Ambassador to Rome, Sir Ronald Graham written in January 1923 and June 1923 respectively. The significance of the author can be viewed in two ways. Firstly one might conceive that as he is obviously a well-respected high-ranking British official he would be telling the precise truth, on the other hand one may believe that he may be distorting the truth in order to satisfy the government as we all know that politics is not without its corruptness. The source states that although the Italians are in awe of Mussolini, "omnipotent as he is..." he is finding it difficult; however successful foreign policy is "of vital importance to him..." In both documents we see a similar reflection of Mussolini's foreign policy. Both articles state that the foreign policy aims were "egotistical" and "opportunistic". This source suggests that one of Mussolini's foreign policy aims was to increase international prestige for Italy, "his foreign policy will be in the sole interests of Italy..." Source 2 is a painting depicting an Italian soldier opening the door of 'freedom' to the Abyssinian 'slaves'. The contextual meaning of the painting is that the Italians are showing the Abyssinians the light of Fascism. The painting suggests that the Italians believed they were benefiting the Abyssinians by 'civilizing' their lives. The source proposes a policy of spreading the ideology of Fascism and establishing an Empire. Source 3 is part of a statement made by Mussolini in 1939 to the Grand Council of Fascism. By this time Mussolini had virtually chosen which side to ally Italy with in the European power struggle. The source gives us an insight into what Mussolini thought about Italy's position in the world; he believed Italy was "semi-independent". ...read more.

However other Italians did not share the same view, one Italian journalist said that Mussolini's "pictures were cut out of newspapers and magazines and pasted on the walls of the poor peasant cottages..." The campaign ended with an Italian victory and with minimal opposition from the Western powers and League of Nations. On the other hand it is questionable whether Italian victory against the Abyssinians was beneficial to the Italian people. The advantages of the war were mainly short term. These were that the Italians were identified as 'true' Fascists, Tannenbaum comments, "In response to League of Nations' sanctions for a few months the identification of 'Italian' with 'Fascist', which had been proclaimed for about the last ten years, seemed a true one." They had revenged the defeat at Adowa in 1896, Clark believes that the triumph was "his [Mussolini's] finest hour..." and the popularity of the Duce cult among Italians was at its peak. The victory detracted the people's attention from the failing Italian economy and the increasing social unrest. The damaging effects of the war were mainly long term however there was once instantaneous effect. This was the detrimental effect on the Italian-Anglo-Franco relationship, which was on its proverbial 'last leg' after continuous political antagonism relating to dominance over the Mediterranean and East Africa. The long-term effects are immeasurable, but the most important consequence on the Italian people was the huge economic cost. The budget deficit rose from 2.5 billion to 16 billion lire, in October 1936 the lire was devalued by 40% and there were massive wage cuts, especially for agricultural and factory workers. A further long-term harmful effect of the war was the huge military cost, along with the Spanish Civil war, Italy was left literally stripped of its most valued weaponry (an estimated 37 tanks, 25 artillery pieces and 67 trucks were lost in the Spanish Civil War alone) ...read more.

Mussolini's foreign policy entanglements increasingly effected the direction and nature of Italy's trade in the 1930's. One of Mussolini's ambitions in foreign policy was to reinforce domestic support. He often controlled and idealised foreign policy for either his own personal image expansion or to increase Italy's international prestige. For the first ten years Mussolini acted fairly cautiously, only participating in mild foreign campaigns, such as Corfu in 1923 and Fiume in early 1924. In the mid 1930's however Mussolini was able to exploit Italy's position as the 'make-weight' of Europe. The Abyssinian war and the intervention in the Spanish Civil war were both great strains on the Italian economy; however the Abyssinian war was Mussolini's peak of popularity. The Rome-Berlin Axis bought Mussolini under Hitler's sphere of influence, shown in the different attitudes to Anschluss in 1934 and 1938. After this alliance the Nazi government began to sway domestic policy and this began to alienate the Italian elite and they began to withdraw their support for Fascism. By 1939 Mussolini's foreign policy looked fairly successful, but in reality he had wasted Italy's precious resources for little real gain. The Italian people meanwhile had been subjected to virtual constant war from 1935, the death of over 4,500 soldiers, massive reduction in core resources and life that was practically controlled by the state. The government's ambitious economic plans, along with the Depression, can be said to have lowered living standards and set Italy back by decades. However the historian D. Williamson claims that "Overall Italy was more prosperous in 1939 than in 1923...but this modest increase did not filter through equally to all sections of the Italian population." I agree with D. Williamson in that although Mussolini's foreign policy seemed successful at surface level, the average Italian did not greatly benefit. Mussolini aimed to make Italy feared around the world; he achieved his purpose, even though it enveloped the unforeseen reaction of contempt towards Italy, the fact that he bought economic ruin and eventual Civil War to the Italian people was unintentional. ?? ?? ?? ?? 1 ...read more.