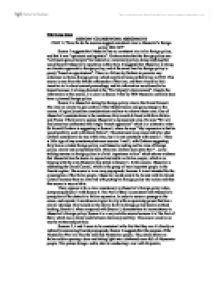 Will Taylor 12G1 HISTORY COURSEWORK ASSIGNMENT PART A "How far do the sources suggest consistent aims in Mussolini's foreign policy 1922-39?" Source 1 suggests that Mussolini has no consistent aim in his foreign policy, and that it was "optimistic and egotistic". Graham states that the foreign policy was "not based upon principles" but instead is a mercenary policy, doing anything that would benefit Mussolini's reputation within Italy. It suggests that Mussolini is taking an altruistic approach to foreign policy, and at the same time his foreign policy is purely "based on opportunism". There is a failure by Graham to perceive any coherence in Italian foreign policy, which may have been perfectly true in 1923. This source comes from the British ambassador of the time, and there would be little incentive to lie about current proceedings, and his information would need to be honest because it is being directed at the "His Majesty's Government". Despite the information in this source, it is clear in Source 3 that by 1939 Mussolini certainly does have a planned foreign policy. ...read more.

There appears to be a clear consistency in Mussolini's foreign policy when juxtaposing Source 3 with Source 6. The Pact of Steel is consistent with Mussolini's perception of the obstacle to Italian expansion. In order to secure a passage to the ocean, and expand, it would seem logical to ally with an upcoming power that has a similar ideology. Italy would not be able to fulfil its foreign policy desires without backing. Source 6, when compared with Source 5, demonstrates an inconsistency in Mussolini's foreign policy. Source 6 is a very reliable source because it is The Pact of Steel, which was a treaty made between Germany and Italy. This source could in no way be written subjectively. Sources 2, 4 and 5 seem to be consistent in the fact that they are all directly or indirectly concerning Fascist propaganda. Source 2 suggests that the purpose of the Abyssinian War is to free the enslaved Abyssinian people. The picture shows an Italian soldier opening a door and letting light into a darkened room full of Abyssinian people. ...read more.

This is consistent with sources 2 and 4 because it is promoting the greatness of Italians and their links to the Roman era when they ruled the oceans. When juxtaposing this source with Source 6, it appears Mussolini contradicts himself five years after the speech, because he has signed a pact with a country that he regarded as inferiors not so long ago. He is now saying Italy and Germany are "united by inner affinity" and have joined "to secure their living space and to maintain peace". Source 1 does not show us any evidence of consistency in Mussolini's foreign policy. The information given may be reliable but it contradicts other sources. Sources 2, 4 and 5 are all examples of the propagada that the Fascist regime used. They do not really tell us much about Mussolini's foreign policy other than that it was expansionist, and looking to rekindle the glory or Rome. However, Sources 3 and 6 show consistent aims in Mussolini's foreign policy. The Pact of Steel (Source 6) would be essential for Mussolini if he were to proceed with his foreign policy of gaining passage to the ocean (Source 3). ...read more.