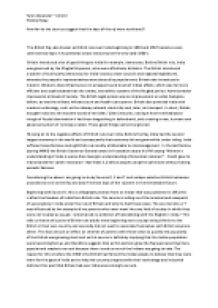 How far do the sources suggest that the days of the Raj were numbered?

﻿Tyler Alexander ? Arnold History Essay How far do the sources suggest that the days of the raj were numbered? The British Raj, also known as British rule over India beginning in 1858 and 1947 became a very controversial topic in households across India around the very early 1900?s. Britain introduced a lot of good things to India for example, democracy. Before British rule, India was governed by the Mughal Emperors, who were effectively dictators. The British introduced a system of multi-party democracy for India's various state councils and regional legislatures, whereby the people's representatives were elected by popular vote. Britain also introduced a modern, Western-style infrastructure to all aspects and levels of Indian affairs, which was far more efficient and sophisticated than the creaky, monolithic systems of the Mughal period. Administration improved at all levels of society. The British legal system was an improvement on what had gone before, as was the military infrastructure and health care system. Britain also provided India with modern technology, such as the railway network, electricity and, later, air transport. ...read more.

This had a knock on effect on children of parents with these views so quickly the popularity of the British was growing short and so this source is definitely implying that the Indian population were becoming fed up and therefore suggests that as this opinion grew the Raj was becoming more popular and maybe to an end because there is only so much the Indians are going to take. The reason for this is before the 1900?s the British had forced the Indian people to believe that they were there for the good of India and to help the country progress with their technology and industrial skills but this spell that Britain had over India was coming to an end. Secondly, source S is from an anonymous leaflet in 1907 around the time of when Indians began to get fed up with the Raj. This source is a prime example of what an Indian thought of British rule at the time. ?Thieves? is what the British are branded in this source. The writer also says ?These thieves import their goods and sell them in our markets, stealing our wealth and stealing from ...read more.

After analysing all three sources they consecutively agree that the days of the raj will slowly come to an end as it seems that the common view of Indians in the early 1900?s was that British rule was bad! Therefore this view will continue to spread and it is inevitable that the Raj will continue and that some sort of feud will break out. In addition, after reading the sources deeply I have failed to find anything to disagree with the statement that the Raj?s days were numbered this is mainly because it eventually became obvious that the British were only in India for profitable reasons of their own and even though they had helped India in the beginning by building railways and importing goods etc it was only a matter of time before it became clear. To conclude, I believe that the Raj?s days were numbered for a couple of reasons, firstly there was only so much good the British could do before their selfish ways became apparent and it was revealed that they were there for themselves. Secondly because greed made Britain want more power over more things and wanted to tax more and control more markets so due to this greed the Indians inevitably became fed up. ...read more.