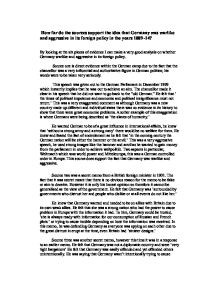 How far do the sources support the idea that Germany was warlike and aggressive in its foreign policy in the years 1889-14?

How far do the sources support the idea that Germany was warlike and aggressive in its foreign policy in the years 1889-14? By looking at the six pieces of evidence I can make a very good analysis on whether Germany warlike and aggressive in its foreign policy. Source one is direct evidence within the German camp due to the fact that the chancellor was a very influential and authoritative figure in German politics; his words were to be taken very seriously. This speech was given out to the German Parliament in December 1899 which instantly implies that he was out to achieve an aim. The chancellor made it clear in his speech that he did not want to go back to the "old German." He felt that ' the times of political impotence and economic and political insignificance must not return.' This was a very exaggerated comment as although Germany was a new country made up different and individual states there was no evidence in its history to show that there were great economic problems. ...read more.

He knew that Germany wanted and needed to be on allies with Britain due to its own weak allies. He felt that she was a strong nation who had the power to cause problem in Europe with the information it had. To him, Germany could be trusted, 'she is always ready with information for our consumption of Russian and French plots.' or trying to cause trouble depending on how the information was received. In this memo, he was defending Germany as everyone was spying on each other due to the great distrust in erupt at the time, even Britain had 'sinister designs.' Source three was another secret memo, however this time it was in a response to an earlier memo. He felt that Germany was not a diplomatic country and were 'very tight bargainers' He felt that Germany was easily offended and yet offended others unintentionally. He was saying that Germany wasn't intentionally trying to cause trouble and direst within Europe. He as defending and excusing Germany in response to Mr crowe whom felt that Germany had an 'un chequered record of black deeds.' ...read more.

This cannot be seen as evidence of how warlike and aggressive Germany was. Every nation involved in the war had certain techniques in which it used to inspire its people for war and to raise moral. It was just pure propaganda. The same could be said for source six, you can only take the information on face value. By analysing the difference in the money spent on armies and navies from 1880 to 1914 you will see that all nations were increasing their investments in these areas. However, the country that stands out on this increase is Germany, due to their weltpolitik aim, overall, every one was getting aggressive for the probable onset of war. By analysing all theses six different sources, there is no conclusive evidence on whether Germany was warlike and aggressive. All the evidence balances each other out and if I had to make a judgement, I would say that every nation was aggressive and warlike, the evidence for his is source six. It was well known that there was great pressure on Germany as the eyes of the world were on them. Every mistake they made was noted and used against them and it could be said that they were picked on. ...read more.