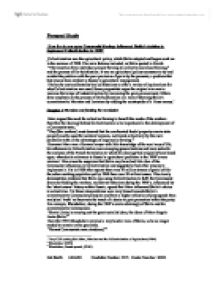 How far do you agree Communist ideology influenced Stalin's decision to implement Collectivisation in 1928?

Personal Study How far do you agree Communist ideology influenced Stalin's decision to implement Collectivisation in 1928? Collectivisation was the agricultural policy, which Stalin adopted and began work on in the summer of 1928. The main features included, as Stalin quoted in Pravda "The transition from individual peasant farming to collective socialised farming," and the process of De-kulakisation. It was an agricultural policy necessary to try and combat the problem with the poor provision of grain by the peasants, a problem that had always been evident in Russia's agricultural management. The heavy cost and brutality has led historians to offer a variety of explanations for why Collectivisation was used. Some pragmatists argue the original aim was to increase the tempo of industrialisation by increasing the grain procurement. Others draw emphasis on the process of De-kulakisation as a way of showing Stalin's commitment to Marxism and Leninism by ridding the countryside of a 'class enemy.' Chapter 1 Marxism and feeding the revolution Marx argued the need for collective farming to benefit the needs of the workers therefore the ideology behind Collectivisation is its importance to the development of a Communist state, "They [the workers] must demand that the confiscated feudal property remain state property and be used for workers' colonies, cultivated collectively by the rural proletariat with all the advantages of large-scale farming."1 However Marx was a German lawyer with little knowledge of the rural way of life, his references to Collectivisation were sweeping generalisations and more suited to the analyses of the French Revolution to which his ideology had originally been based upon, whereby its relevance to Russia's agricultural problems in the 1930's were minimal. This raises the suspicion that Stalin may have had little idea of the Communist influences on Collectivisation and suggests he had other reasons to implement it. Yet in 1928 after exports there was 10 million tonnes of grain left for the urban working population yet by 1930 there was 18 million tonnes. ...read more.

"Stalin was basically carrying through what Lenin started,"11 Kolakowski made this comment without strong analysis of the differences between Lenin and Stalin's policies. It is a general comment made with Marxist philosophy in mind with little relevance to economic evidence. Stalin aimed to use Collectivisation as a way of widening the party's power within the countryside much like War Communism had suppressed the conservative 'Greens,' during the civil war. I believe Lenin's War Communism foreshadowed some of the main features of Collectivisation; therefore Leninism-Marxism influenced Stalin's decision to Collectivise in 1928 Stalin was attempting to be seen as Lenin's successor during the 'struggle for power' in 1928 Leninism-Marxism may have influenced the choice to Collectivise to a greater extent than Communist ideology. Chapter 4 Bureaucratic control and beating the 'right' in 1928 Stalin always maintained his political allegiance was to 'Marxism-Leninism.' Yet some of the key features of Stalinism go a long way to explain other influences on Collectivisation and why these, were more important then the Communist influence. Marx disagreed with the use of a dictatorship to achieve the prosperity of Communism. Yet Stalin's implementation of Collectivisation was an attempt at creating a centralised bureaucracy. The NEP had allowed the peasantry to do as they pleased with their grain and subsequently the peasants often decided to hoard grain and use it for their own ends. Therefore Stalin enforced Collectivisation to remove the control from the peasants and give it to the party. "The deposed and abused bureaucracy, from being a servant of society, has become its lord."12 This source supports the view that Stalin acted to centralise the bureaucracy, however it is victim to heavy bias against Stalin's character. 'From being a servant of society' highlights the limitations of the bias, as the source rather than being a balanced assessment of two leader's governments, implies Lenin did not use the bureaucracy to control, when in fact we know he did. ...read more.

But yet again the huge focus on competing with the west in both agriculture and industry was a form of propaganda to increase the popularity for Stalin's regime. Which it did very well. I do agree that the extent to which Collectivisation coerced and terrorised the peasantry was not intended when Stalin implement it in 1928, and that some of the brutality was due to the over zealousness of local party officials. Despite this Stalin's main reason for collectivising in 1928 was to further his own power, both by increasing his popularity amongst the party, applying a policy smacking of Marxism-Leninism, to destroy Bukharin during the succession for power. And to increase the Party grip over the countryside and put the country's most important raw material, grain, under Stalin's total control. The apparent strong influence of Communism was simply a form of propaganda to justify a bureaucratic, dictatorial policy, to the more dedicated Communists within the party clearly demonstrating the choice to Collectivise was influenced almost entirely by Stalin's desire to increase his power both within the party and the Russian populous. Word Count: 3500 1 Tony Cliff quoting Karl Marx, Marxism and the Collectivisation of Agriculture (1964) 2 Khrushchev (1949) 3 Khrushchev, Secret speech, (1956) 4 Isaac Deutscher 'Russia after Stalin' (1953) 5 Das Kapital, Karl Marx (1887) 6 Stalin, 'On the grain front' (1932) 7 Harvests of Sorrow, Robert Conquest (1986) 8 Stalin's Peasants, Sheila Fitzpatrick (1994) 9 Stalin's Peasants, Sheila Fitzpatrick (1994) 10 Roy Medvedev, Let History Judge, (1971) 11 Leszeck Kolakowski, Main Currents of Marxism, (1970) 12 Leon Trotsky, Miscellaneous quote. 13 Stalin's Peasants, Sheila Fitzpatrick, (1994) 14 Pravda Article, Stalin, (1932) 15 Alan Wood, Stalin and Stalinism (1990) 16 Leon Trotsky 17 Party Congress Meeting, Stalin (1928) 18 Chris Corin & Terry Fiehen, Communist Russia under Lenin and Stalin (2002) 19 Even Mawdsley, The Stalin years, (1998) 20 Bukharin (1931) Zak Smith U6AMO Candidate Number: 2125 Centre Number: 26233 ...read more.