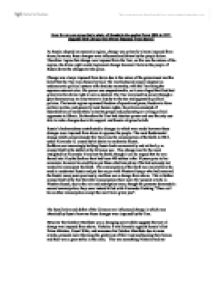 How far do you agree that a study of Russia in the period from 1855 to 1917 suggests that change was always imposed from above?

How far do you agree that a study of Russia in the period from 1855 to 1917 suggests that change was always imposed from above? As Russia adopted an autocratic regime, change was primarily always imposed from above; however, these changes were influenced and driven by the people below. Therefore I agree that change was imposed from the Tsar, as this was the nature of the regime, the divine right would implement change however I believe the people of Russia drove the changes to take place. Change was always imposed from above due to the nature of the government and the belief that the Tsar was chosen by God. The vast backward empire adopted an undemocratic political system with absolute monarchy, with the Tsar being the supreme autocrat ruler. His power was unquestionable, as it was alleged that God had given him the divine right to rule as desired. The Tsar exercised his power through a great bureaucracy, an army sworn to loyalty to the tsar and oppressive political policies. ...read more.

The humiliation and defeat of the Crimean war influenced change in which was inherited by Russia however these changes were imposed by the Tsar. However the October Manifesto was a changing point which suggests that not all change was imposed from above. Nicholas II was forced to appoint Russia's first Prime Minister, Count Witte, and announce his October Manifesto due to mass revolts; peasants were throwing the gentry out of their land and burning their homes and their was a great strike in the cities. This was something Nicholas had not genuinely wanted to do, however he was forced to by mass opposition to his reign, and the peasant revolts. Furthermore, his abdication in 1917 is a clear example of change not from above, but instigated by the people themselves. Nicholas II believed in absolute monarchy, however he was still forced to resign. During WW1, from 1915 onwards Nicholas II left for the front leaving Russia in chaos, and though the Duma formed a Provisional Government to try to restore order it was impossible to turn the tide of revolutionary change. ...read more.

Alexander III's strict treatment of the people is often attributed to his mentor the holy Synod Pobedonostsev, who was a firm believer in the absolute authority of the monarch. It's clear that Alexander III was not led by the public, by his refusal to sign the constitution his father had been forced to. Under Alexander II and Nicholas I the people did have considerable influence in how Russia was led, however under Alexander III this was not the case. The Provisional Government was also led by the people, because they lacked the authority to pass any laws. They were utterly undermined by the Bolsheviks, who organised the masses which countered them, and their inability to organise elections meant they were eventually run out of power. Overall, under Alexander II, Nicholas I, and The Provisional Government, the people of Russia did have considerable leverage over the change they saw in their country. Under Alexander III this was not so much the case, however it's clear that the statement 'change was always implemented from above' is true however the people had a massive amount of influence. ...read more.