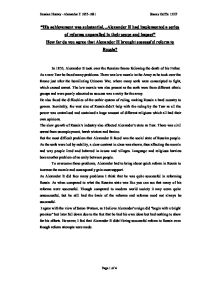 How far do you agree that Alexander II brought successful reform to Russia?

"His achievement was substantial...Alexander II had implemented a series of reforms unparalled in their scope and impact" How far do you agree that Alexander II brought successful reform to Russia? In 1855, Alexander II took over the Russian throne following the death of his Father. As a new Tsar he faced many problems. There was low morale in the Army as he took over the throne just after the humiliating Crimean War, where many serfs were conscripted to fight, which caused unrest. The low morale was also present as the serfs were from different ethnic groups and were poorly educated so success was a rarity for the army. He also faced the difficulties of the unfair system of ruling, making Russia a hard country to govern. Inevitably, the vast size of Russia didn't help with the ruling by the Tsar as all the power was centralised and contained a huge amount of different religions which all had their own opinions. The slow growth of Russia's industry also affected Alexander's state as Tsar. There was civil unrest from unemployment, harsh winters and famine. But the most difficult problem that Alexander II faced was the social state of Russian people. As the serfs were led by nobility, a clear contrast in class was shown, thus affecting the morale and way people lived and behaved in towns and villages. ...read more.

which was probably the worst error of the lack of censorship. Alexander was also able to reform the industry in Russia, which overall was mainly successful. He was able to expand the workforce from 860,000 to 1,320,000 by 1887, which resulted in new industries and methods being able to be set up. For instance the increase in coal production, textile industries and most importantly the development of the Naphtha Extraction Company in 1879. Main Industrial cities were also established. This helped put Russia on the ladder of industry to catch up with the powerful Western Europe Industries and also increase the capital in Russia therefore making it a more stable country. The negative outcomes were to happen later rather than in Alexander's reign, for instance: inflation in Alexander III's Reign. Alexander II also tried to reform the Education system in Russia and the Army. Education was reformed to prevent barriers between people as many serfs could not write or read. The government also wanted the schools to be regulated. To increase the amount of people educated more public schools were built and established. Grammar schools were introduced for higher-class families. A national curriculum was also introduced. The successes of this were reform were that many people learnt to read and write and the possibility of university was increased to all social class members. The successes though also led to failures as many more people went abroad to go to university and with this brought back dangerous ideas, which led to opposition and revolts. ...read more.

After censorship had been made less severe many books and newspapers issued new ideas to people, which caused them to revolt after seeing another side to the Tsar. Revolts were also caused by the bad harvests, when there was low morale due to the lack of food and increase risk of disease. In conclusion, I agree with the view of Seton-Watson and E. Crankshaw who both believe that Alexander II had a successful start to his reign but then led to his own downfall, as he left 'no stamp on the age'. Even though he attempted many reforms, none of them were entirely successful, as he reformed censorship by giving writers and editors the 'freedom of expression' but then he restricted the reform by banning several books and forbidding certain topics for discussion. Therefore not actually changing anything on censorship and so didn't leave his stamp. Another example of Alexander not leaving his stamp is the fact the after the liberation of the serfs they still remained attached to the Mir to pay off their redemption taxes and once again he didn't actually change anything because the peasants were still under the control of a higher person. Also the example of military reform; conscription was introduced in the army to replace forced recruitment. I feel that Alexander II was not successful in bringing about successful reform in Russia as he didn't actually change anything just adapted the structure of rule that was already standing. Russian History -Alexander II 1855-1881 Stacey Griffin 13HF Page 1 of 4 ...read more.