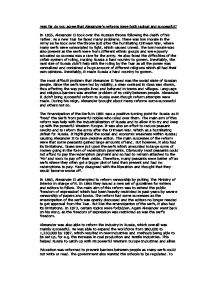 How far do you agree that Alexander's reforms were both radical and successful?

How far do you agree that Alexander's reforms were both radical and successful? In 1855, Alexander II took over the Russian throne following the death of his Father. As a new Tsar he faced many problems. There was low morale in the Army as he took over the throne just after the humiliating Crimean War, where many serfs were conscripted to fight, which caused unrest. The low morale was also present as the serfs were from different ethnic groups and were poorly educated so success was a rare for the army. He also faced the difficulties of the unfair system of ruling, making Russia a hard country to govern. Inevitably, the vast size of Russia didn't help with the ruling by the Tsar as all the power was centralized and contained a huge amount of different religions which all had their own opinions. Inevitably, it made Russia a hard country to govern. The most difficult problem that Alexander II faced was the social state of Russian people. ...read more.

In 1865 they issued a new set of guidelines for writers and editors to follow. The main aim of this reform was to extend the public 'freedom of expression' which had been heavily restricted in past years by severe censorship of papers and books. The reform had some successes as the emancipation of the serfs was openly discussed and the editors no longer needed to get approval from the Tsar. But like the emancipation of the serfs, it also had its limitations. In 1873, certain topics were forbidden. Again Alexander went back on his word, as the freedom of expression was restricted as was the serf's freedom. Alexander was also able to reform the industry in Russia, which overall was mainly successful. He was able to expand the workforce from 860,000 to 1,320,000 by 1887, which resulted in new industries and methods being able to be set up, for e.g. the increase in coal production and textile industries. This helped Russia to catch up with its powerful Western Europe Industries and allies Education was reformed to prevent barriers between people as many serfs could not write or read. ...read more.

The judges were also paid higher wages, so the chances of them accepting bribes were reduced. This was successful as there was now a freedom of expression within the courts but they were still operated by the secret police and Tsar who had a lot of power over the court cases, and also political cases were not tried in courts. In conclusion, though Alexander attempted to reform many aspects of Russia, he only did it at 'limited measures' and during his reign there was very little reform in financial policies, the poll tax is a key example. It was a heavy burden on the peasants but gentry were exempt from which caused grief and unrest between the civil classes. As a result of Alexander's reforms many people began to revolt and oppose his rule. Revolts were also caused by the bad harvests, when there was low morale due to the lack of food and increase risk of disease. Even though Alexander II introduced many reforms, none of them were entirely successful in bringing about reform in Russia as he didn't actually change anything, just adapted the structure of rule that was already standing. This probably explains why he was assassinated in 1881. ...read more.