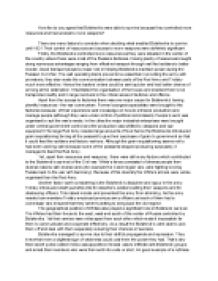 How far do you agree that Bolsheviks were able to survive because they controlled more resources and had access to more weapons?

﻿How far do you agree that Bolsheviks were able to survive because they controlled more resources and had access to more weapons? There are many factors to consider when deciding what enabled Bolsheviks to survive until 1921.Their control of resources and access to more weapons were definitely significant. Firstly, the Bolsheviks controlled more resources as they were situated in the center of the country where there were most of the Russia?s factories. Having plenty of resources brought along numerous advantages ranging from effective transport through well fed soldiers to better morale. Good transport played a major role in helping Bolsheviks maintain power during the Russian Civil War. The well operating trains proved to be essential in providing the army with provisions, they also made the communication between parts of the Red Army and Trotsky much more effective. ...read more.

Although the grain requisitioning seems not to had been working well (because some of the peasants stopped producing surpluses), it managed to feed the Red Army. Yet, apart from resources and weapons, there were still many factors which contributed to the Bolshevik?s survival of the Civil war. White?s forces consisted of diverse people from diverse nations with diverse aims (for example the Czech legion who were fighting to bring Russia back to the war with Germany). Because of this diversity the White?s armies were worse organised than the Red Army. Another factor worth considering is the Bolshevik?s discipline and rigour in the army. Trotsky introduced death punishments for deserters, soldiers selling their weapons and for disobeying officers. This raised morale and prevented the army from shrinking. As the army needed commanders Trotsky employed previous army officers yet each of them had a commissar who ensured that they weren?t plotting to bring back the old regime. ...read more.

An good example of a ruthless Bolshevik action was the suppression of the Kronstadt Rebellion, where the 60-thousand Red Army completely crushed the protestants. What gave the Bolsheviks a significant advantage over the Whites was their complete devotion to the cause. They were fighting for an ideology they believed in ,or, at least, were manipulated to think they believed in, unlike the White who fought for their personal benefits. Bolsheviks believed that workers of other countries would follow Russian example and hence the communism would spread all over the world. That?s why they simply couldn?t afford to lose and were prepared to pay a price as high as was needed. I don?t agree that Bolsheviks? survival was due to the advantage of having more resources or weapons. I think that the strong leadership of Lenin and Trotsky contributed more to their survival. They weren?t afraid to use ruthless methods to preserve communism and made the army work properly which turned out to be enough to win the civil war. ...read more.