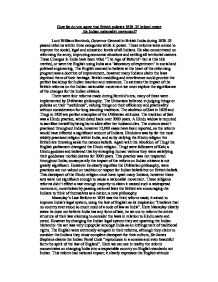 How far do you agree that British policies 1828-35 helped create the Indian nationalist movement?

How far do you agree that British policies 1828-35 helped create the Indian nationalist movement? Lord William Bentinck, Governor General in British India during 1828-35 passed reforms within three categories while in power. These reforms were aimed to improve the social, legal and education levels of all Indians. He also concentrated on reforming the army, improving economic situations and settling all territorial matters. These Changes in India have been titled "The Age of Reform"- but is this title merited, or were the English using India as a 'laboratory of experiment' in social and political engineering. The English seemed to believe at the heart of the reforming program was a doctrine of improvement, however many Indians claim the laws deprived them of their heritage. British meddling and interference could provide the perfect backdrop for Indian reaction and resistance. To estimate the impact of the British reforms on the Indian nationalist movement we must explore the significance of the changes for the Indian citizens. ...read more.

Macaulay's Law Reform in 1834 was the third reform made; it aimed to improve India's legal system, using the law of English as its inspiration "I believe that no country ever stood so much need of a code of law as India". Here Macaulay clearly states he does not believe India has any form of law, he set out to reform the entire structure of their law claiming to consider the laws in relation to Hindu caste and creed. However by changing the Indian legal system they are upsetting the Indian hierarchy- the act was very unpopular amongst India as an infringement of traditional rights. The English were extremely arrogant in their reforms, although they claim to consider the Indians they show complete disrespect for their culture, Sir James Stephens claims the Indian Penal Code "reproduces in a concise and even beautiful form the spirit of the law of England". Here we can see in reality the reform concentrates on changing India into a respectable country on English standards not Indian. ...read more.

Whereas some believe it was a change for the best improving Indians "sense of identity" and proved great progress for India, many others believe it was an obvious "intention to destroy India's own traditions of knowledge". I believe it did enhance Indians sense of identity, however not through the use of the English language, as I have said before the English illuminate the differences between English and Indian tradition, therefore uniting Indians as one. Prior to the English take over India had not been one country but an area made up of separate provinces, the reforms lead to Indians exploring their united beliefs- recognising themselves as a nation. Out of this came Indian nationalism, which in term caused the Indian nationalist movement. Although these reforms alone weren't the sole reason for the origin of the Indian nationalist movement they did gain England a lot of disrespect from Indians. The British attempted to reform India into England; into their personal view of civilisation, in reality they had no compassion for their beliefs. This lack of respect would have caused the Indians to become angry at the government- therefore raising tension and causing dispute. ...read more.