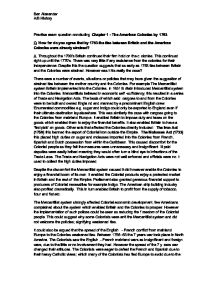 How far do you agree that by 1763 the ties between Britain and the American Colonies were already strained?

Practise exam question concluding Chapter 1 - The American Colonies by 1763 Q. How far do you agree that by 1763 the ties between Britain and the American Colonies were already strained? A. Throughout the 1700's Britain continued their firm hold on the colonies. This continued right up until the 1770's. There was very little if any resistance from the colonies for their independence. Despite this the question suggests that as early as 1763 ties between Britain and the Colonies were strained. However was this really the case? There were a number of events, situations or policies that may have given the suggestion of strained ties between the mother country and the Colonies. For example The Mercantilist system Britain implemented into the Colonies. In 1651 Britain introduced Mercantilist system into the Colonies. Mercantilists believed in economic self-sufficiency; this resulted in a series of Trade and Navigation Acts. The basis of which said: cargoes to and from the Colonies were to be built and owned England and manned by a predominant English crew. ...read more.

Despite the discomfort the Mercantilist system caused it did however enable the Colonies to enjoy a financial boom of its own. It enabled the Colonial products enjoy a protected market in Britain and the rest of the Empire. Parliament also granted generous financial support to producers of Colonial necessities for example indigo. The American ship building industry also profited dramatically. This in turn enabled Britain to profit from the supply of tobacco, flour and fist etc. The Mercantilist system strongly affected Colonial economic development, few Americans complained about the system which enabled Britain and the Colonies to prosper. However the implementation of such polices could be seen as reducing the freedom of the Colonial people. This could suggest why some Colonists were anti the Mercantilist system and did not welcome the policies; signifying weakened ties. It could also be argued that the spread of the English - French conflict from mainland Europe to the Colonies weakened ties. Between 1756-63 the 7 years war took place in North America. ...read more.

The British system implemented into the colonies was in practise easygoing. The strong relations stemmed from the Colonists pride in their British heritage and rights. Many Americans were loyal to the British. This was shown when around 25,000 Colonists fort alongside the British in the 7 years war. It could be argued that the main reason for unity was due to the economic interest for both nations. The Colonists were very much aware of their economic strength which was due to the British Mercantilist system and enabled both the Mother Country and the Colonies to enjoy a sustained period of prosperity. In conclusion, from looking at and analysing the influence the British had on the Colonists and the economic wealth and unity both nations shared it is fair to suggest that ties between Britain and the Colonies were not in fact strained by 1763. Just because the Colonies achieved their independence 13 years later it would be an unfair and inaccurate statement to say that relationships were infact strained. Therefore to answer the question taking into account the points stated above I disagree that by 1763 relationships were strained. ?? ?? ?? ?? Ben Alexander A/S History ...read more.