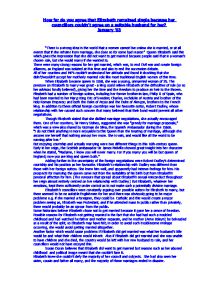 How far do you agree that Elizabeth remained single because her councillors couldn't agree on a suitable husband for her?

How far do you agree that Elizabeth remained single because her councillors couldn't agree on a suitable husband for her? January '03 "There is a strong idea in the world that a women cannot live unless she is married, or at all events that if she refrains from marriage, she does so for some bad reason" Queen Elizabeth said this which gives the impression that she did not want to get married because people said that is a woman's chosen role, but she would marry if she wanted to. There were many strong reasons for her get married, which was, to end Civil war and create foreign alliances, as England was isolated at this time and also to end the succession debate. All of her courtiers and MP's couldn't understand her attitude and found it shocking that she didn't/wouldn't accept her motherly married role like most traditional English women of this time. When Elizabeth became queen in 1558, she was a young, unmarried woman of 25. The pressure on Elizabeth to marry was great - a king could relieve Elizabeth of the difficulties of rule (or so her advisors fondly believed), giving her the time and the freedom to produce an heir to the thrown. ...read more.

Susan Doran believes that Elizabeth did want to get married but reasons such as her abused childhood and political image meant that she couldn't face it. Elizabeth knew she couldn't defy the majority of her council and subjects. She had also seen her sister, cousin and father all marry, and the majority of these marriages ended in disaster. Twice during her reign she was going to get married, in the 1560s to Robert Dudley and in 1578-1580 to Francis of Anjou. But both times she was met with strong opposition from her councillors and other people. Lord Burghley opposed to Elizabeth marriage to the Duke of Anjou saying that she was too old to have a baby, if she did have a baby she could die in birth and also, if she got married to him and was unable to produce an heir, they would be left with the Duke. And this would be a major problem as he believed that everyone hated France. He also claimed that the new king may try to get rid of Protestantism. On the two occasions when she would have been willing to wed, Archduke Charles in the late 1560s and Henry of Anjou in 1571-72, some kind of consensus was drawn up. ...read more.

Although Robert Dudley was cleared of any wrong-doing in the matter, Elizabeth could not marry him because of the scandal that would no doubt arise. Or perhaps it was a combination of both. Regardless of the reason, Elizabeth never married, but managed to successfully play her suitors off of one another for about 25 years, gaining alliances and wealth from gifts on the possibility of marriage. The one serious contender for her hand was the Duke of Alen�on of France, but negotiations failed eventually. Elizabeth never decided not to get married, and only subscribed to the myth of the 'virgin queen' as it was the last option. Many people have chosen to see Elizabeth's public self-presentation as a Virgin Queen as a sign of some inadequacy. Marriage had many potential difficulties, and if Elizabeth married she ran the risk of people perceiving her husband as the real ruler. Marriage could also have led to the embarrassment that had dogged her sister Mary with her hysterical pregnancies, or to the risks of dying of disease related to childbirth, as were the fates of her step-mothers Jane Seymour and Katherine Parr. Certainly there were both personal and political costs to marriage. Ultimately, however, Elizabeth made the right choice; while on the throne, England flourished, and her reign ushered in a new Golden Age for Britain. ...read more.